She was executive vice president and COO of Enterprise Rent-A-Car, the nation’s largest car rental company, when the Taylor family purchased the National and Alamo brands in February 2007. In August 2008 she assumed the position of president, while retaining her role as Enterprise’s chief operating officer and as a member of the board of directors of Crawford Group, Enterprise’s parent company.

How Busy Is She Now?
She runs Enterprise Rent-A-Car, National Car Rental, Alamo Rent-A-Car and Enterprise Commercial Trucks. Add Enterprise Car Sales, the second largest used car dealer in America, with 170 branches and sales of 70,000 used cars a year. Throw in Enterprise Fleet Management, which funds about 190,000 vehicles, and you get the picture about just how busy she is.

Nicholson, 48, succeeds Donald L. Ross, who will continue as vice chairman of the company and its board of directors. She is only the fourth person to hold the office in Enterprise’s 51-year history and only the second executive outside the Taylor family to serve as the company’s president, following founder Jack C. Taylor and his sons, Andy and Ross.

If you ask Nicholson how she does it, she’ll credit the organization and say she is surrounded by great people. “Our promote-from-within policy drives people to do the right thing, and we pay on performance, which drives the right behavior,” she says. “When they’re promoted from within they’re here for the long term. There are many in [Enterprise’s] corporate management who have been with us for 20 to 25 years.”

Nicholson herself is the poster child for Enterprise’s promote-from-within performance culture.

Performance Driven
Nicholson began her career with Enterprise Rent-A-Car in 1981 as a management trainee in St. Louis. Within nine months she was promoted to assistant branch manager, and within a year she accepted a position in the company’s recently opened and fast-growing Southern California group.

“When I first got to Southern California, we were brand new,” she says. “The market didn’t even know who Enterprise was. We helped grow it from scratch with a young new team of people. We had a blast doing it.”

Throughout the next 12 years, Nicholson was promoted through the ranks to regional vice president, one of the top positions in Southern California. During that period, the Southern California group grew from 1,000 to more than 27,000 cars in its fleet, and today is the company’s largest operating group.

In 1994, Nicholson returned to her hometown of St. Louis to become a corporate vice president at Enterprise’s worldwide headquarters, overseeing 10 operating groups in the U.S. In this position she was instrumental in establishing the first national preferred provider rental agreements between Enterprise and many of the top auto manufacturers.

“When I came from California to corporate 14 years ago, there wasn’t the endorsement from the manufacturer level to the dealerships to use us on the service drive,” Nicholson says. “I started from scratch working with the fleet folks to sell the idea that if they endorsed us, they would be getting the best service in the industry.” 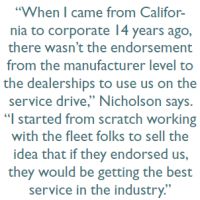 In 1997, Nicholson was promoted to the top job with Enterprise’s New York group, the company’s second-largest operating group. The group more than doubled its profitability under her tenure.

She was promoted in 1999 back to St. Louis as senior vice president, North American operations for Enterprise, then chief operating officer in 2003 and president in 2008.

In the span of her career to date, Enterprise grew from a 20,000-vehicle fleet and less than $100 million in annual revenue into the largest car rental company in North America, with $12 billion in total annual revenue.

The primary driver of that revenue growth has been Enterprise’s development of the insurance replacement business and home city market. Nicholson was a key player in jumpstarting that business, which grew from $3 billion in revenues industry-wide 16 years ago to more than $10 billion today.

Now, in steering the biggest ship in the industry, Nicholson has some pretty big tasks on her to-do list.

Merging Three Brands
A primary focus is the continued integration of the former Vanguard with Enterprise.

This includes assimilating National and Alamo franchisees. Twenty-seven licensed territories have been purchased since the Taylor family’s acquisition of the National Car Rental and Alamo Rent A Car businesses in August 2007.

“This will continue,” Nicholson says. “We’re not going to expand the franchise network.”

Enterprise has moved 80 National and Alamo employees from its old corporate headquarters in Tulsa to St. Louis. Employees that perform shared services, such as license and titling, risk management and certain accounting functions, will remain in Tulsa.

Back-office integration between the brands is moving forward, pending legal and IT systems integration issues. In terms of fleet, National and Alamo vehicles can switch between each other as needed, though Enterprise is not yet sharing its fleet with its siblings.

Enterprise sells through traditional channels such as auctions and its used car lots, as well as online auctions and retail Internet sales. In an industry moving further away from program cars, Enterprise’s remarketing acumen with risk vehicles has served it well.

“Our main way of selling our vehicles is through our incredible remarketing team of 850 people who go out and hand sell all of our risk cars back to the dealers we buy from,” Nicholson says. “We know these dealers very well. We buy our cars locally, we fix our cars locally and we service their customers on the service drive.”

That on-the-ground relationship with dealers means they can call up and pluck a vehicle from Enterprise’s “virtual used car inventory” sight unseen. Enterprise will pull selected vehicles out of fleet and deliver them to the dealer, and if any vehicle isn’t right, Enterprise will take it back and replace it.

The Transportation Package
A major driver behind the Vanguard purchase, says Nicholson, is the ability to leverage the value proposition between National and Enterprise to the business community. With potentially half of a business’s car-rental spend going to the local market, companies can now take advantage of Enterprise’s 6,000 local branches in conjunction with National’s Emerald Isle service on airport.

Along with National and Alamo comes a partnership with Europcar, which provides Enterprise further opportunities to attract international business. Enterprise also operates in the United Kingdom, Ireland and Germany.

“We’ve got a complete transportation package that no one else in the industry can compete with,” Nicholson says.

Corporate car-sharing operations, in which cars are stationed in lots with electronic access for hourly rentals, are a growing part of the mix. Enterprise has one such agreement with Google.

Growth Potential
On airport, Enterprise has grown from about a 2 percent share to 9 percent in eight years. With National and Alamo’s 20 percent airport share, Enterprise has leapfrogged to a 29 percent total market share on airport.

The National and Alamo brands have grown as well since the purchase, an indicator that the three brands are not cannibalizing each other’s business. In terms of types of renters, the three brands overlap only about 2 percent, Nicholson says.

While Alamo services the leisure traveler, the National corporate customer uses the Emerald Isle service to bypass the counter and jump in the car. Enterprise comes in as the value provider, Nicholson says. “Those millions of customers that rent in the home city over the years have asked us to go on airport because they like our type of customer service and the extra handholding that Enterprise provides,” Nicholson says.

While Hertz continues to homestead on local market land, Enterprise’s growth has not abated, having experienced a compound annual growth of 20 percent since 1993. Nicholson says the competition in the local market combined does not add up to Enterprise’s 6,000 branches.

Industry Challenges
Enterprise is challenged with the same factors as the rest of the industry: a weak economy, high gas prices and the decrease in rental fleet sales.

With the Vanguard acquisition, the new size of the company called for more investment capital than ever before in the midst of an uncertain economic climate. Nicholson says the company’s investors wanted more frequent financial updates than in the past.

Enterprise responded by scheduling quarterly conference calls. The company embarked on a “no-deal road show” this year to “tell our story so our investors understand more of who we are,” Nicholson says.

In a time when the public car rental companies’ stocks are languishing, Enterprise remains the only investment-grade company in the industry. The company’s credit remains “outstanding,” Nicholson says, as banks continue to tighten lending standards in a deepening credit crisis. “We have not had a problem raising money when we’ve needed it,” she adds.

In terms of vehicle mix, Enterprise anticipated to a certain extent the industry shift to smaller cars. “We saw it coming, and as a result, we bought fewer of the bigger SUVs and trucks,” Nicholson says. “When gas prices topped $4, did we see that coming? No. The used car market on the big SUVs and trucks fell fast. We’re feeling the residual decline in the trucks.”

Enterprise has been increasing its foreign buy, including vehicles from Toyota, Nissan and “all of the non–Detroit Three” for the past three years. “We buy from everybody,” Nicholson says. “It’s a reflection of what the American public is buying.”

In keeping with the industry trend toward longer hold times in the wake of fewer rental fleet sales, Enterprise plans to run its cars up to 13 months from 10½ to 11 months. “We’ll sell our fleet where we feel its best, not trying to manage by quarterly earnings,” she says. “We’re lucky because we’re privately held. We can rightsize our fleet and take the hits when we need to take them.”

Well Positioned Nicholson maintains that Enterprise has the resources to do what is right long-term.

“We feel we are in a better position to succeed than any other company in these downtimes,” Nicholson says. “We have the best balance sheet in the industry because the Taylor family continues to invest back into the business and invest in the brand moving forward.”

Any talk of going public is quelled immediately. “As it stands now there is absolutely no reason for them [the Taylor family] to go public and they don’t want to,” says Pat Farrell, the company’s vice president of corporate responsibility and communications.

Enterprise offers evidence of its commitment to stay private by the fact that a third generation of the Taylor family is being groomed into management.

Until then, Pam Nicholson has plenty to keep her busy.