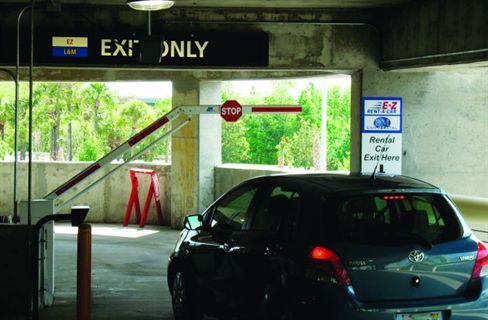 Imagine customers driving off your rental lot without having to stop and wait for your employee to scan vehicles with a radar gun and wave them through the exit. Radio frequency identification (RFID) technology in car rental operations is making this scenario a reality.

RFID technology is another tool in an emerging trend of modern security and asset-management systems in the car rental industry. RFID tags and readers help automate inventory control while eliminating the use of clunky, expensive handheld barcode scanner guns.

Flower says in the recent past, RFID tagging was a viable concept but was too expensive to implement. Two to three years ago, an RFID tag consisted of a little box that cost $30 to $50. The technology has advanced to the point where RFID tags have been reduced to the size of a mailing label, are made of paper, and are much cheaper.

One independent rental company has embraced RFID technology. In October 2009, Florida-based E-Z Rent-A-Car set up a pilot program at its Orlando International Airport location to test the effectiveness of an RFID tracking system.

Other traditional security measures on rental lots, such as chain link fences and metal sliding gates, aren't foolproof against a potential thief, Sas says. A thief can drive a large vehicle through a chain link fence or place a wooden plank over a row of tiger teeth to create a ramp to drive over.

Sas says that after Sept. 11, the security industry employed new types of systems for car rental, such as plate barrier systems and crash bars. "We've had to come up with systems that were harder to break," says Sas. 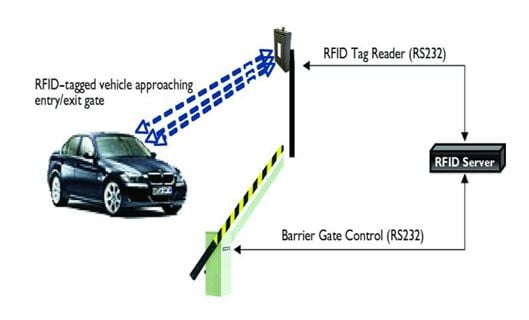 Sas says the RFID system can typically be installed in two days, but setup time depends on whether vehicles are on rent or idle. "It took us a week to label about 90 percent of our cars. Then we set up an area where cars without tags would be staged for tagging," he says.

RFID tags, about the size of a standard mailing label, are affixed to each vehicle's windshield. The tags store data such as the vehicle's make, model, color, gas capacity and physical location. An individual RFID tag costs $5.50 to $7 depending on the size and type of tag, according to Flower. The tags can be activated or deactivated through a software system that costs about $10,000 to install per rental location.

The RFID tags connect via radio waves to an electronic device on the rental lot that reads the data stored on the tags. When a vehicle with a tag passes within the vicinity of an electronic reader, the reader picks up the tag data and relays it to a software system that tracks the activity of vehicles.

Electronic readers have a range of 15 to 90 feet and cost about $2,000 each. They usually come in weather-resistant cases and can be placed on pedestals, poles, walls or ceilings. Readers are typically installed at a lot's entrance and exit, but they can also be installed in multiple locations on larger lots. Sas says four readers are installed at the company's Orlando location and two more will be added later.

Employees use the software system to authorize a tag to leave the lot, which can automatically trigger the exit gate to open. This allows a customer to drive off the property without being checked out by an employee with a barcode scanner gun.

While the initial cost and setup of an RFID tracking system is capital intensive, the program can help a rental operation streamline its inventory management, improve employee accountability and reduce labor and equipment.

According to Sas, the standout feature of the RFID system is its real-time inventory data and tracking reports. The system's automatic data transmission saves time and gives Sas valuable information instantly about his fleet. Sas can generate reports to know how many cars are on rent, how many are on the grounds and where they are.

The system also helps Sas reduce his overall security costs. "From a labor perspective, we don't have to have a manned gate anymore," he says.

"We also eliminate the human factor of employees getting together with the guard company where they can just open the gate and let people out."

He adds that the usage of RFID tags and readers completely eliminates the need for traditional barcode scanner guns, which can be expensive to replace if they're broken. RFID tags are small and appear flimsy, but they are more resilient to sunlight, water and other elements that can easily damage barcodes.

High Tech for an Independent

Seven months after implementation of the RFID tracking system, Sas says his rental lot has not had a theft. While he can't credit the new system entirely, he is certain it has streamlined fleet logistics.

"In the morning, all the fleet department needs to do is print a report and they can match it with the cars on their lot, which greatly reduces the inventory time," he says. "They like it because they can tell what's sitting idle and where, which allows them to relocate the fleet as needed."

He attributes the successful integration of the RFID system to E-Z's business model and size. The rental company caters mostly to vacation travelers, who often use the same location to pick up or drop off their rentals. This makes it easier for the company to tag and track its vehicles.

The rental company has nearly 40 locations, comprised of franchises and affiliates, in the United States, Canada, Costa Rica, Mexico and nine other countries. Despite its international reach, E-Z still manages to be nimble and adapt to new technologies, such as RFID tagging.

Unlike larger companies with substantial financial investments in legacy systems, "Small companies have the flexibility to change to this technology," Sas says.

He suggests that smaller rental agencies that can't afford RFID systems on their own budgets can partner to share rental lots and the cost of electronic readers.

Peace of Mind from RFID

While other methods for tracking vehicles are available, Sas says the RFID system proved to be an affordable investment for his company. The company plans to expand the program to its Miami and Fort Lauderdale airport locations in the second quarter of this year, with rollout at further locations a possibility.

He admits that while the RFID tracking system makes fleet management easier, it's not a total solution to auto theft prevention. "Does it solve the security problem? Probably not. Car thieves are professionals and they're going to figure out a way to get around things," Sas says, but the system gives him the peace of mind in knowing where his vehicles are at any given time.