Hertz Global Holdings reported a second quarter net loss of $25.1 million because of restructuring charges, compared with a profit of $3.9 million in the second quarter of 2009. Revenue rose 7.1 percent to $1.88 billion, though expenses grew 9.4 percent.

The car-rental company's earnings beat Wall Street's expectations, though revenue was below analysts' estimates, according to the WSJ.

Meanwhile, Dollar Thrifty continues to outperform Wall Street's expectations. The company more than tripled its profit in the
second quarter, earning a net income of $42.3 million compared with $12.4 million a year earlier.

"We are very pleased that the company once again has produced another record quarter and is on pace to make 2010 the most profitable year in the history of the company," said CEO Scott Thompson during an earnings call with investors. 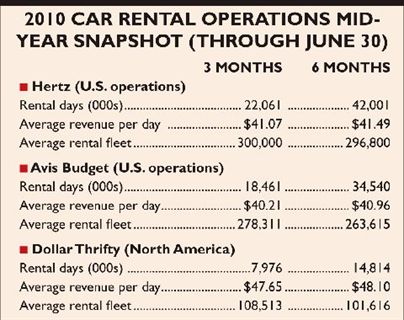 In its second quarter earnings call, Hertz CEO Mark Frissora said that weakened consumer confidence has affected the company's leisure business; however, commercial business has accelerated. This is driving a shift in mix toward commercial business, he said.

Frissora noted that Hertz has added 27 Advantage airport locations and 298 new off-airport stores to its rental network since April 2009. Those new stores have not yet fully realized their revenue potential, he said.

Avis Budget reported a rebound in commercial activity as well, specifically with its largest corporate clients and small businesses.

The company reported that its ancillary revenues are up 28 percent over the last two years, attributable to GPS rentals, its emergency roadside assistance product and electronic toll payment service. Avis will soon a launch a satellite radio offering.

Dollar Thrifty attributed much of its success in the quarter to "sweeping changes made in fleet planning and remarketing during 2009." Including gains from vehicle sales, the company realized fleet costs of $193 a month per unit. During the second quarter, the company sold some 18,400 risk vehicles and realized a gain of about $1,500 per vehicle sold.

Meanwhile, Dollar Thrifty attributed its slip in total revenue to a decline in vehicle leasing revenue, resulting from a planned reduction in vehicles leased to franchisees.

All three companies continue to benefit from the ongoing strength of the used-car market. The companies are not experiencing liquidity issues, and credit facilities are solid.