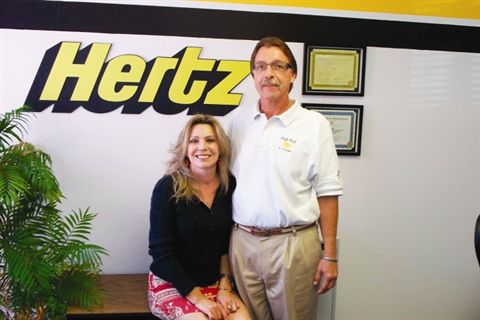 Being the only rental location in a town of 20,000 people has its advantages. Just ask Brady Krueger, who runs a Hertz Local Edition in Newton, Kan. His operation is dedicated to insurance replacements.

Krueger says small towns can be difficult locations for rental operations to succeed on their own. "If other 20,000-population towns are like we are, I don't think [bigger rental agencies] could afford to have an exclusively automobile rental agency sitting in that town," he says. "You just can't run the volume, so to attach it to another existing business is a way to spread your name."

In Krueger's case, his Hertz Local Edition operates alongside his insurance agency, Krueger Insurance Management. The property and casualty insurance firm handles personal and commercial lines of insurance for individuals, manufacturers, contractors and municipalities, including the city of Newton. The company also represents several insurance companies, including Allied Insurance, and is a Progressive "Signature Agent," making it one of the national insurer's top agencies.

Krueger says his two businesses have operational synergies. They share the same office building and personnel. More importantly, the insurance agency can supply its clients with insurance replacement vehicles on the spot.

"It's really a nice deal," he says. "That's why we started [the car rental operation] in the first place...we just felt like that was one more piece of customer service for the insurance agency."

Getting Into the Rental Game

Before Krueger had the Hertz operation, he got his insurance rentals from local, independent car rental agencies. Then insurers switched from independent operations to national brands. "Our rental cars first came from Wichita, which is about 20 miles away. Then they started coming from Hutchinson, which is about 35 miles away," he says.

He didn't have a problem accepting rental cars from nearby cities, but he did have a problem when the cars wouldn't show up on time for his customers. After a couple of years of receiving customer complaints, Krueger decided to set up his own car rental agency. He first contacted Enterprise about setting up shop, but was turned down due to competitive reasons regarding established nearby territories.

Krueger reached out to other car rental companies, including Hertz, and received immediate interest from the company. "They responded really quickly, really positively, to us," he says. "I think our timing probably could not have been better...it was right when they were really starting to get into the insurance replacement business."

In 2002, Krueger and his wife Sheryl opened a Hertz Local Edition. It was only the second one operating in the state of Kansas at the time. The rental operation has its own dedicated office and rental counter separate from the insurance agency. The Hertz logo and photos of cars are prominently displayed on the wall behind the rental counter. On the outside of Krueger's office building stands a Hertz sign and the insurance agency's sign side by side.

Krueger didn't have to add full-time personnel to get up and running in the rental car operation. "Our existing insurance staff takes care of the daytime rentals and returns," he says. "We have a dedicated Hertz telephone line and whoever's not on another line will be the one who answers that."

The rental operation stays open an hour later than the insurance agency, so Krueger has two part-time rental employees who oversee the counter and clean rental cars during that time.

Sometimes, Krueger will join in and clean the cars, too. "It's a good wind down after the day. You sit behind a desk and you're on the phone all day. You're doing, in some cases, some pretty intense insurance stuff," he says. "And so, if I get in an hour of crawling under dashboards and seats cleaning stuff and whisking around the vacuum and all of that, that's a nice little end of the day stretch out."[PAGEBREAK] 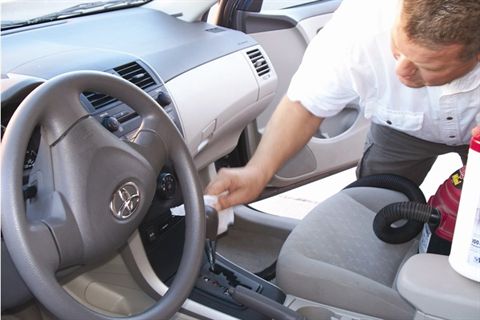 As an independent agent, Krueger's rental operation operates differently from traditional franchise operations. For one thing, he doesn't have to worry about fleet acquisition. Hertz provides him with rental vehicles, so he doesn't have to purchase his own. He says he usually keeps four to seven vehicles at a time, but no more than that.

Krueger also doesn't have to handle any vehicle maintenance or repairs. His rental operation is 20 miles from Wichita, where Hertz has a regional office, so the company sends drivers to pick up rental cars when they need service. "They'll send a driver down here with a good car, and he will take back the car that's in need of service. So, we don't do anything," he says.

An additional benefit is that, along with his regular commission, Hertz pays Krueger a separate fee for cleaning his vehicles.

While Krueger may have fewer operational responsibilities than his traditional franchise peers, success as an independent agent comes largely based on how he markets his rental operation to the local public.

He promotes the rental and insurance agencies together in advertisements that appear in the local newspaper, two phone books and the high school sports programs. In ads primarily dedicated to the insurance agency, Krueger will include a couple of lines to promote the rental business along with the Hertz logo and the car rental dedicated telephone number.

The consistent advertising has paid off as Krueger rarely has unused or extra vehicles sitting on his lot. "We're usually not sitting there with a lot of spare automobiles. And it's just amazing how many times we run out," he says.

In addition to insurance rentals, which account for 25 to 30 percent of total business, Krueger says locals will rent vehicles for vacations, business trips or when their own cars are in the repair shop for non-insurance reasons. "The other insurance agents in town, they will send people down here for rentals as well," he adds.

Krueger says whatever profit the rental operation generates, he divides and shares with his full-time and part-time staff at the end of the year.

He says any decline in his car rental business won't hurt him or his employees. "It's not going to affect anyone's livelihood if there's a drop off in the car rental business. The insurance agency does just fine all by itself," he says. "The Hertz income is a fraction of this office's total revenues."

Krueger also owns and operates a 7,200-square-foot storage unit facility next door to his office building. However, he still appreciates the supplemental income from his Hertz Local Edition operation. "It's a bonus-a nice sized bonus-at the end of the year," he says.[PAGEBREAK]

How to Educate Consumers on the Benefits of Loss Damage Waiver

One benefit of having insurance professionals running a car rental operation is that they know how to best explain the benefits of a loss damage waiver to drivers.

"We have a bit more knowledge of loss damage waiver than if customers were asking about it at the local airport," says Brady Krueger, owner of a Hertz Local Edition and Krueger Insurance Management in Newton, Kan. "We know how the auto policies work and what the advantages of buying the loss damage waiver is compared with relying on your auto policy."

Krueger's frontline personnel inform renters that if they don't purchase a loss damage waiver and rely on personal auto policies, they will first have to pay their collision deductible after an accident. Then they face additional damage charges from the car rental company. The RAC will likely tie up their credit cards until it receives insurance reimbursement-and that usually won't happen until the insurance company gets a copy of the police report and has a chance to talk to all parties involved in the accident. These charges can add up, especially with credit card interest rates.

Krueger says Kansas is a comparative negligence state, which means that fault is not necessarily absolute and could be assigned on a percentage basis to drivers in the accident. This increases the chances of fault in any accident.

Drivers who are found at fault may pay even more out-of-pocket, non-reimbursable expenses in addition to their collision deductibles: If a renter's reimbursement coverage is $30 a day and he or she crashed a rental that goes for $45 a day, he or she would pay an additional $15 out of pocket. In addition, the rental agency may go after the driver for administrative fees and diminution of value charges, which are excluded from personal auto policies.

Krueger recounts one insurance client who learned his lesson the hard way. The man rented a vehicle in California and didn't purchase the loss damage waiver. He got involved in a traffic accident with a big rig and the incident took about three months to resolve. During that time, the car rental company he used had charged his credit card for nearly $10,000 worth of damages.

"The loss damage waiver, if you take it, it's pretty much you come in, you fill out the little report ...and walk right back out the door. No expense out of pocket," Krueger says. "We always recommend a loss damage waiver. It's just a vastly superior way to protect yourself than it is to rely on your own auto policy."