The car rental industry won a small victory in the Kenosha-Racine-Milwaukee commuter rail funding debate. In December, the Southeastern Regional Transit Authority (RTA) voted to oppose immediately levying a $2 fee on car rentals. It seems that lower car rental revenues have bureaucrats wondering if taxing car rentals is the cash cow they anticipated.

Maine residents have been getting the message where their legislature has not. A "tax reform" bill introduced by legislators included a tax increase on car rentals from 10 to 12.5 percent. In October, Maine residents blocked the bill, temporarily, via petition. It goes up for a vote again this June.

Now a bill has been introduced into the Arizona legislature to use car rental taxes to fund renovation of the Chicago Cubs' Cactus League stadium.

With some battles won, some staved off for another day and others yet to be fought, I offer some general solutions for legislators in terms of funding these projects. These new funding sources shift the burden away from car rental and onto new victims:

If legislators insist on predatory taxation to pay for things completely unrelated, I say dump on pot dispensaries. They're huge here in California, especially in Los Angeles, and the opposition might have a problem getting off the couch, especially if Family Guy is on.

If taxing the out-of-town traveler is still in vogue, why not tax generally annoying tourists? You know, all those undertipping, line-jumping, loudly opinionated, camera-in-your face, plaid-clashy-outfit-wearing ones. (You may have to tax yourself here.)

A tax on those shorts.

Sin taxes are used to dissuade certain types of behavior, such as those on cigarettes and alcohol. I'd like to tax people who feel the need to burden their kids with radically important names such as Blanket, Seven or Sage Moonblood. Bad karaoke singers should be taxed too. (It could be worse-in the Philippines, they're shot.)

Good taxation involves generating revenue from the people who benefit the most from what is being built. For stadiums, let's tax the fans who use and abuse the privilege of being at a ballgame. You know these people: the guy who can't stop waving the foam "number one" finger in front of you, the guy next to you who spews meaningless trivia the whole game and the woman who gets pissed when you don't stand up for the wave. A sin tax on the lot of them. While we're on stadiums, a "facilities surcharge" would bring in good revenue, especially after heavy beer sales. But if you charge for using the bathroom at ball games, you might need to tax adult diapers too.

If naming rights to stadiums are sold, why not sell them to rail lines? "Ross Dress for Less train now leaving on track six!"

If we're talking about taxing cars, let's implement a sin tax on bad aftermarket jobs such as ridiculous fender flares and spoilers, gaudy paint jobs, fake hood scoops and a window sticker that tells everyone you're driving a Toyota Corolla. 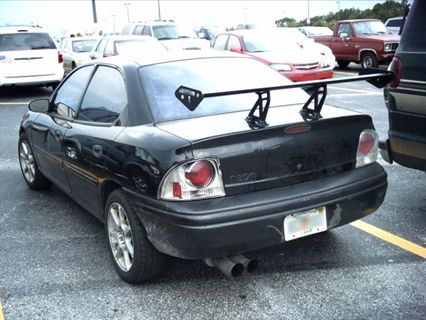 Tax this. No Dodge Neon deserves this.

Wait, I've got one more novel idea on whom to tax and how. How about taxing a broad constituent base with low marginal tax rates, one that spreads the burden fairly amongst the people who benefit from what is being financed? Why not tax train tickets or sporting event tickets? Better yet, for stadiums, why not have the owner of the team pitch in? Nah, that would never work.