The average retail price of a used vehicle represented 58 percent of the average new-vehicle price in February, based on ADESA Analytical Services' calculations using the most recent Federal Reserve Board data. 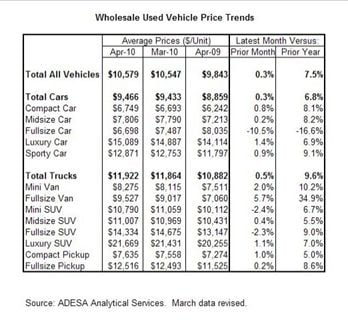 According to ADESA Analytical Services' monthly analysis of Wholesale Used Vehicle Prices by Vehicle Model Class, wholesale used-vehicle prices in April averaged $10,579 - up 0.3 percent from March and 7.5 percent versus prior year.

Full-size vans and full-size cars recorded the biggest year-over-year price gains and losses, respectively. But these segments are small and can often have volatile average price swings based on variations in such things as seller type and vehicle condition.

Prices for most segments are moving with the overall market, although mini and full-size SUV prices did take a bit of a hit in April - perhaps due to rising gas prices over the last couple of months. Minivans registered above-average price gains during the month.