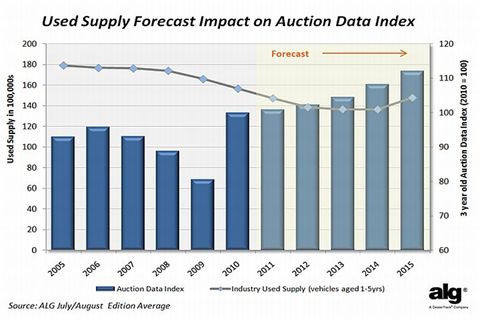 ALG forecasts that the used-vehicle supply will decline over the next few years because of the extensive drop in new-vehicle sales in 2009.

As the used-vehicle supply decreases, resale values increase and vice versa, holding demand constant. Resale values saw a large decline of 16 percent between 2006 and 2009, but have jumped up 24 percent from 2009 to 2010. The decline in used supply will boost residuals an additional 3 percent by 2013.

Used supply is expected to pick back up in 2015 as a result of the forecasted growth in new-market sales, lessening the positive impact on residual values, ALG said.

The gradual recovery of the economy, indicated by improvements in the consumer confidence index and real gross domestic product, has already helped automotive sales pickup in May, according to ALG.

Overall, new sales are expected to recover to 2007 levels within the next four years.

"In the long run, this recovery will increase used supply for the overall industry, which, in turn, will put negative pressure on resale values," ALG said.

The CUV segment, in particular, will be impacted by the expected growth from now until 2014. Prior to the fuel price highs and economic trouble in 2008, this segment had shown an average of approximately 25 percent year over year growth from 2002 to 2007. The recovery on new-vehicle sales is a positive step forward, but the used supply impact will put pressure on residual values.