For 2013, the company is also pleased to report two new supplier relationships, adding Mazda and Volkswagen products to its fleet.

Out of 2012 fleet purchases, 67% of the vehicles receive 30 miles per gallon or better.

The car rental company said the transaction will provide additional long-term fleet funding before the next scheduled fleet debt matures.

The deal will give Hertz an additional 1,550 locations worldwide and a total of 9,800 across six continents. Under the terms of the deal, Hertz will pay $41 a share, a 19 percent premium over Dollar Thrifty’s 30-day average stock price. The offer is 80 percent cash and 20 percent stock.

The transaction provides the company with the funding to complete expected fleet purchases, DTG’s President and CEO Scott L. Thompson said. "It also confirms that the company is again able to access vehicle financing at competitive rates and enhancement levels and highlights our plan to lower the overall interest carry cost of our fleet consistent with our focus on return on assets," he added.

Forty percent of DTG&#39;s vehicles are rated over 30 mpg.

A meeting between a trading and research firm and Dollar Thrifty sheds light on current state of the industry. 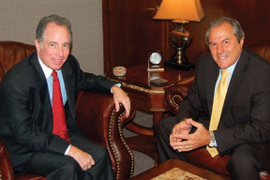 Scott Thompson and Jeff Cerefice discuss Dollar Thrifty’s move to refranchise, debt restructuring, fleet financing, the science of car sales, loving 45,000-mile rentals and how the company is positioned well for the run to recovery.