Recall Repairs Are Not Afterthoughts

It's easy for small commercial fleet operators to neglect recall repairs. If "fleet" isn't your first business priority, recalls must be.

Should Auto Recalls Be Delineated by Severity?

Analyzing recall data gets us closer to an answer.

History tells us to plan for disruption. 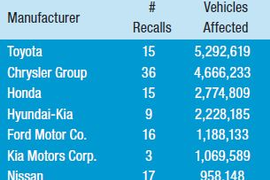 While the total number of recalled vehicles hit 21.9 million vehicles in 2013, 2014 is on pace to break the record.

Addressing the Problem of Unsecured Loads

If you don’t think unsecured loads in pickups and trailers are a national problem, some new data from NHTSA, Maria Federici’s story and a disturbing video will make you think otherwise.