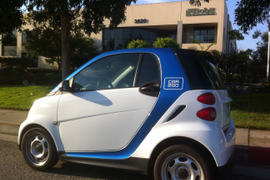 The theft of exotic cars due to lack of proper security controls brings up insurance, liability and quality concerns regarding the peer-to-peer model. Sometimes it’s not so smart to cut out the middleman.

Hertz Lays Out Plan for 1,000 Electric Vehicles and Beyond

How are high fuel prices and the Japan crisis affecting supply and demand for car rental?

What is Peer-to-Peer Renting?

Owning a fleet is so 2009. Welcome to the new neighborhood car rental.