With the recent downturn in the economy and the credit squeeze, cash rentals are making a comeback of sorts. While the majors publicly shy away from the practice, it can be a significant percentage of revenue for car rental operators—if they can manage the risk.

“Cash rentals” cover rentals not secured with a credit card. That includes cash, debit cards and cashier’s checks. In terms of risk management, a renter who pays a cash deposit and ultimately pays for the rental using a credit card is still considered a cash rental.

Auto Rental News sought the opinions of operators to determine whether accepting cash deposits is worth the trouble and solicited their best practices on limiting loss.

How Much Business Is Cash?
“If a customer does not have a credit card, we’re just not going to rent,” says Monica May of Accessible Vans of America. AVA dealers rent wheelchair–accessible vans to the disabled, and the demand in that specialty market is such that AVA locations worry less about a customer taking his or her business elsewhere, May says.

With an upscale ski clientele, Dollar Rent a Car of Jackson Hole, Wyo., has no need to take cash rentals or debit cards, says Petti Riley.

Many independent operators, however, say cash rentals generate 20–40 percent of revenue, or higher. Fully 80 percent of the business at White Auto Rental Inc. of Glenolden, Pa., is from cash rentals, says Pat Downs. His views sum up much of the independent operator’s sentiment on the practice: “I feel [cash deposits] are great because they help me compete with the bigger rental companies,” he explains. “But it creates all the havoc in the world for me because I’m getting a type of customer that usually has bad credit.”

Downs estimates that as much as 60 percent of his cash deposit rentals turn into some sort of problem. Tom Purdy of Alaska Car and Van Rental in Ketchikan says his problem rate is about 20 percent. David Ward of Express Rent A Car in Grand Junction, Colo., does 25 percent cash rentals, and of that says he gets burned on just two out of every 100.

While renting with a credit card is always preferable, some say the problem rate is about the same. “We’ve been burned [by cash rentals], but no more than with a credit card or a debit card,” says Diane Kaderly of Rent A Wreck in Knoxville, Tenn.

Nonetheless, for those problem rentals, operators say they rarely recoup the lost rental revenue or loss caused by a stolen or damaged vehicle. The deposit generally covers only a fraction of the bill. Moreover, most insurance companies don’t cover the damages that result from cash deposits.

The best outcome is usually being able to recover the asset as quickly and painlessly as possible after the problem arises. For this reason, operators make sure to put cash customers in an older, higher-mileage unit.

Debit Cards Can Also Be Risky
For Kerry Steele of Rent A Jalopy in Detroit, using debit cards provides “a better chance of being able to get your money because you can always go back and get more [if it’s needed].”

However, while initially the renter may have enough in his or her account to rent the vehicle, the situation could get messy when the renter does not return the rental on time and has no money left in the account. It is important to stress to customers using a debit card that the money—hundreds of dollars—is being pulled out of their account immediately.

The debit card client is still essentially a person with no credit, says Jim Tennant of the Tennant Group, a consultant to the vehicle rental industry. “A person with a debit card and no credit card is not going to be as good a renter,” he states. “He’s going to have more accidents and more problems.”

Credit Cards Not Failsafe
One benefit to cash payments, though, is the fact that the customer can’t charge back the rental as they can on a credit card. Renters can contest a rental charge with their credit card company, which can become an accounting nightmare for the RAC.

Further, LaPlaca says that state laws regulating car rental take a harsh stand against slamming the credit card used for a rental to collect for damage to the rented car—unless the customer agrees to the amount of the loss on a separate, post-accident charge ticket.

Credit cards have varying degrees of loss, identifiable by brand. A study conducted by Jim Tennant over a one-year period (see chart) shows that renters using American Express and MasterCard had the lowest overall loss of the major credit cards studied. When Montgomery Ward was still in business, its credit card fared the worst. Tennant reports that analysis of Sears cards showed a similar loss ratio.

Cash Customers: How to Qualify Them
For most companies, cash renters must provide a driver’s license with a current address, a utility bill or a pay stub that verifies proof of residency and employment and a verifiable phone number.

“They have to have a driver’s license and proof of car insurance, but you don’t have time to get their whole life history in five minutes and send them out,” Ward says.

Downs does accept customers that ask the company if they can put the rental in someone else’s name because they have no credit.

AVA policy allows a second party with a credit card to pay for the rental, but that person has to qualify in the same way. “Our qualifications may be a little steeper than anybody else’s,” says May. The company requires transferrable insurance (they don’t sell additional insurance products) and they also require, except in the state of Michigan, that all drivers must be 21. “We don’t make any other exceptions; our insurance won’t allow it,” May says.

Some companies go further in qualifying the customer. John Leadingham of Carolina Rent A Car in Charlotte, N.C., says his company charges an application fee for cash rentals. Renters also must be responsible for their own full coverage insurance. Additionally, the company runs a credit and criminal background check on the customer. “You would be surprised by the number of renters who have warrants or have pulled hard time,” he says.

Leadingham mitigates losses further by having zero tolerance when it comes to an overdue vehicle.

Verifying information can be tricky, especially in some states with statutes that favor the renter over the operator. In Alaska, a driver who has his license suspended is asked to voluntarily send in the license, says Purdy. Moreover, the DMV will not verify a suspension, as the information is considered confidential.

Deposit policies vary. Some operators require $150–$200 plus the estimated length of the rental. Some require the estimated rental plus a week deposit. Others take a flat fee, often in the range of $350.

The Profile of the Problem Renter
There is no “profile” for the problem renter; however, operators are tipped off to be more cautious by a sloppy appearance or renters who look like they’re on drugs. They tend to be alone; they might have a backpack, Downs says. “They look like they’re going away—and that’s exactly what they’re doing.”

“If I get someone who I think might be a little shaky, I’ll ask more questions,” Ward says. “If the rest of their story checks out, I’ll rent to them. If it doesn’t, I won’t.” Ward says there aren’t many people he ultimately turns down. “Usually they eliminate themselves. Either they don’t have money for the deposit, or they don’t have the money after I run their debit card.”

Ward recalls an incident in which he got burned: “I had a car that was stolen and the police found it months later,” he says. “It was pushed off a cliff in Arkansas and [the renters] had chiseled all the VIN numbers off the car.” 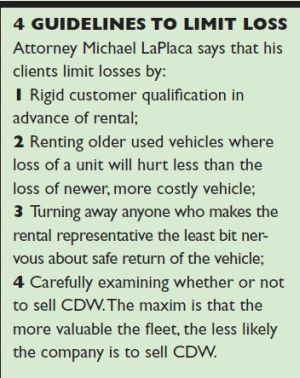 Luckily, police were able to find a VIN number that the wrongdoers forgot to scratch off, but by that time, the damage was done. Ward was able to collect insurance for the collision, but he was not able to collect on the stolen vehicle.

“Turning away customers should be business related,” LaPlaca contends. “There is a danger that a cash rental company can get in the habit of refusing service to persons in constitutionally protected classes.”

“Discrimination is an issue if you are turning down a higher percentage of one protected class,” says Tennant. “It is up to you to prove that you are applying the same standards to everyone and that your standards are not in and of themselves discriminatory.”

Ward has 10 units installed and will soon install 10 more. Ward paid about $220 per unit; the prices have since dropped to $150-$175, he says. There is no monthly fee, though operators pay a fee each time they locate (“ping”) a vehicle. “One healthy rental will pay for the GPS unit,” says Ward.

Downs has 11 units installed and paid $300-$400 per unit. While the tracking devices provide some peace of mind in knowing where your cars are, and most systems have a remote shut-off ability, you still have to be proactive in getting them back, Downs says.

Downs and his team “repo” the cars themselves. “We’re sneaking up to our own vehicle with our hearts racing,” he says. “We’re going to dash into their driveway, unlock the car—hopefully an alarm doesn’t go off—and try to pull out.”

Operators should always have a spare set of keys, Downs says, though making duplicates can get expensive (as much as $150 per key) because of the computer chips in the keys. Downs has found that some renters have cut the ignition so the employee can’t even start the RAC’s own car.

Pennsylvania law states that a rental vehicle that is not returned is not considered stolen, as the RAC voluntarily handed over the keys. The car can be reported missing, but recovery of the asset and lost rental revenue becomes a messy civil matter, Downs says.

So with the tracking devices, White Auto Rental hopes to “limit our loss rather than have a complete loss,” says Downs.

There is no set-up fee, according to Paul Simpson, the company’s president and CEO. Each lookup costs $1–$3.

A Growing Sector “[Cash rentals] are a lot of work, but can be a good revenue source if done right,” says Leadingham.

Many operators concur and feel it’s the only way they can compete with the corporate RACs. Tennant maintains that the independent owner or licensee who has direct contact with customers is better apt to limit loss from cash rentals.

LaPlaca predicts that the cash rental sector will likely grow in the next two to three years.

Ashley Willis is associate editor of Auto Rental News. She can be reached at ashley.willis@bobit.com.