When the first consolidated auto rental agency centers opened 12 years ago, they were a novelty that delighted most customers with their efficiency and convenience. Yet they worried many auto rental agencies, particularly smaller independents that feared being shut out of the new centers by prohibitive costs or other restrictions.

Today, there are consolidated centers (called CONRACs or CRCFs) at 15 U.S. airports and at least another two dozen under construction or in planning. Though certainly not appropriate for every market, the consolidation concept is no longer a novelty and its popularity is growing fast. 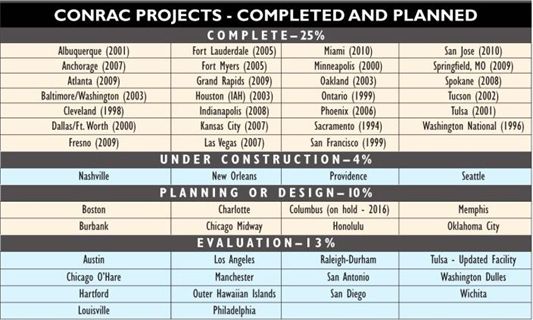 So, consolidated facilities are here to stay.

Fortunately, during its decade of evolution, many initial concerns about the concept have been reduced or resolved through careful airport and car rental agency negotiations and stronger cost controls. True, some smaller independents will always have difficulty meeting the demands of CONRAC participation. The cost of staffing operations for extended hours, paying rents that are typically higher than off-airport facilities and meeting requirements on fleet levels and vehicle quality can make CONRACs prohibitive. 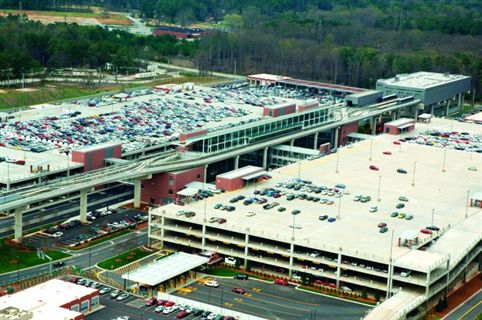 But increasingly, airports are trying hard to be as inclusive as possible. The new $242 million CONRAC designed by PGAL (part of a joint venture team that included R L Brown & Associates and Walter P Moore) for the Hartsfield-Jackson Atlanta International Airport - the world's largest consolidated facility - houses 13 auto rental agencies. In addition to nine large national brands, the center includes four smaller agencies that had been operating off-airport and constitute 1-2 percent of the airport rental car market: Atlanta Rent A Car, Airport Rent A Car of Atlanta, E-Z Rent A Car and Payless Car Rental System.

"We built the CONRAC to accommodate the independents as well as the national brands," says Chilli Ewing, assistant director of airport concessions at Hartsfield-Jackson. "Prior to the opening, we were able to give these independents on-airport counter space which allowed them to get their feet wet. They then qualified for participation through our competitive bidding process."

It has been worth the effort, says DJ Jamshidi, manager of the E-Z Rent A Car operation: "E-Z corporate is very committed to participating in CONRACs as a means for increasing our market share and being competitive in the future," he says.

E-Z operates in six states and is participating in consolidated facilities in nine markets. "Since the Atlanta CONRAC opened last fall, we have already seen an increase in business," Jamshidi says. "Even though we haven't yet been able to sell our off-airport facility, we're happy we moved. We really had no choice if we wanted to grow."

In terms of operational efficiency and customer service, being in a consolidated facility has many advantages. "Our customers don't have to worry about missing their plane due to weather or accidents while they're on a bus from our off-site location," he says.

Like all agencies in the new center, E-Z has to charge a slightly higher CFC fee (a facility charge that is passed through to the customer). "But," says Jamshidi, "we haven't had to raise our rental prices which helps make us competitive when folks who have reserved with one of the majors can't get the car they want or don't want to wait in line. Our local customers don't seem to mind coming to the airport for rentals, so it's been a win-win for us overall."

Sandra Hahner, director of operations and airport affairs for Payless Car Rental Systems Inc., agrees: "CONRACs even the playing field for companies like us." With operations in 40 locations in 11 states, Payless is also seeking opportunities in CONRACs.

"When we go into a CONRAC, our market share almost always grows," she says. "Our counter space is smaller in Atlanta than the majors but we benefit from increased visibility and all the additional customer convenience features. We've seen an increase in business and expect to see more."

The Challenge for Independents

Of course, the happier smaller agencies are, the more large agencies at some CONRACs may worry their traditional customers might be lured away by the typically lower prices independents can offer. In many cases, independents can charge slightly lower rental fees because they spend less on mass marketing and/or are willing to take a smaller profit. Ideally for them, increased volume offsets higher costs of doing business from a consolidated center. On the other hand, large agencies have the advantage of a slew of marketing tools and branded customer programs/services to help them sustain a healthy market share.

"I can confidently say that everyone involved with the Atlanta CONRAC is very pleased," says Hartsfield-Jackson's Ewing. "Greater operational efficiency, a healthier workplace for employees and the tremendous benefits that consolidation provides for everyone's customers add up to a better business environment for all participants."

Airports have a reason to include smaller, independent agencies in their consolidated centers because broader competition benefits customers. Further, elected officials often encourage airports to welcome small, local companies, especially certified disadvantaged, minority or women enterprises. Also, for environmental and congestion reasons, airports would rather move independents on-site than have them continue busing to off-site locations.

Yet, airports can restrict participation based on minimum requirements for an agency's length of time servicing the airport, current market share and demonstrated ability to meet the center's staffing, fleet, scheduling and cost requirements. All agencies pay the same rental cost per square foot to participate. Amount of space is allocated based on market share and can change annually as market shares change.

Independents have to decide if they have the resources to meet the demands of CONRAC participation and whether the investment is likely to pay off in long-term business growth.

For rental agencies of any size, the wisest way to respond when a new consolidated facility is proposed is to become proactively involved in the discussion - make your potential interest known early to local airport authorities and participate in helping the concept take shape in your market. Early involvement can help rental agencies get the information needed to make informed decisions about whether to pursue space in the new facility. Further, it gives agencies with a strong commitment to grow market share time to assess, strategize and marshal the required resources.

Being active in early planning also gives agencies a bigger say in the consolidated facility's design of individual spaces and shared facilities (wash bays, fueling stations, parking garages or surface lots and customer-service areas), which will directly impact their operations.

Based on PGAL's experience, one of the strongest trends is toward creating the "greenest" centers possible. Some examples:

● The LEED-certified Atlanta CONRAC is integrated with a new automated people mover (APM) system, the Sky Train, which replaces hundreds of diesel-powered rental agency shuttle buses, as well as reduces traffic on terminal roadways and the airport's carbon footprint. APMs are not economically feasible for smaller markets but diesel buses can be replaced by clean-fuel vehicles. (LEED is an internationally recognized green building certification system developed by the U.S. Green Building Council.) 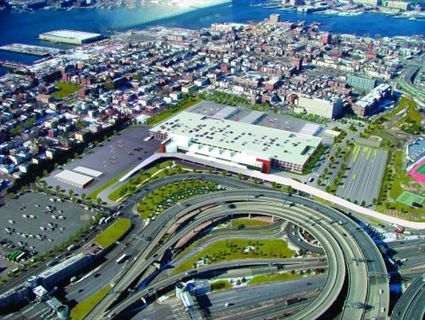 ● In Boston, plans call for a clean fuel common bus operation that will serve not only the CONRAC but also the city's Blue Line train.

● Water efficiency can be boosted through use of low-volume fixtures, drought-resistant landscaping, and use of recycled water for car washes. At the Santa Barbara Airport in California, the facility's car wash system reclaims and reuses approximately 85 percent of its water. This facility recently earned LEED Gold certification, a first for the city of Santa Barbara and for a consolidated rental car facility anywhere. 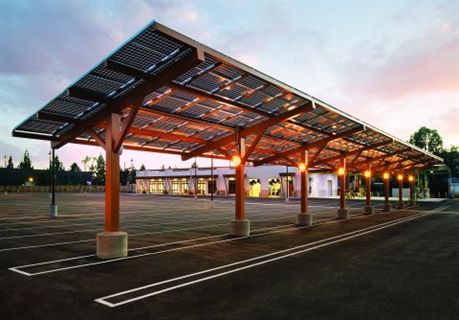 ● The use of solar photovoltaic systems can produce significant energy savings. At the Santa Barbara Airport, the solar panel system has made the facility completely self-sustaining. It basically draws no power from the power grid.

● Amenities can be installed to encourage employees' use of public transportation and bicycles (including showers and changing rooms).

● Equality of facilities and access for all rental car companies: This doesn't mean equal space and positioning for all agencies (which is typically determined by market share), rather each agency should have equal quality of space and equal access to the renting public.

● Facility size: It's critical to "right size" a CONRAC. A facility that is overly large for its market and too expensive to construct, finance and manage will deter some small agencies hoping to participate at an affordable cost.

● Design flexibility to accommodate change: It's important that the design allows for changing agency needs caused by realignments in market share, agency consolidations or withdrawals. This applies not only to customer service areas but to ready/return parking areas within a garage, where careful placement of structural elements can increase flexibility of use. For example, at the Atlanta CONRAC, instead of the four smaller garages originally contemplated, it was designed to have two bigger garages with lots of contiguous, flexible space and fewer obstructions that can set usage "in stone."

● Customer-oriented design features: The design should be geared to provide the easiest possible customer access from the terminals, access to the rental car counters, minimal walking distances to a rental car, as well as excellent signage and wayfinding within and to the facility. Also, ramps must be designed to move people in and out of the airport quickly.

What will this mean for independents? Unfortunately, for some small independents, it may mean loss of significant airport business and a necessary realignment of business strategies toward local customers. But for others, it will mean greater visibility, growth and an opportunity to compete on a bigger - and more even - playing field than ever before possible.

Jeffrey A. Weiner, AIA, is a principal with PGAL, a national architectural and engineering firm. The firm's aviation design work includes landside and terminal facilities, including consolidated rental car centers, at more than a dozen airports across North America.