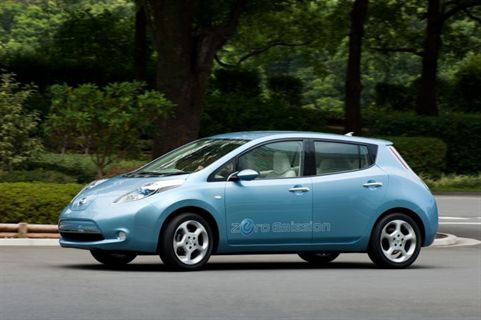 Enterprise Rent-A-Car announced Tuesday the first phase of its plans to offer electric vehicles (EVs) at select U.S. locations. Delivery of 500 Nissan LEAFs will begin in January 2011 and will continue throughout the year.

In addition to the LEAFs, the company will offer customers electric vehicles from other manufacturers as they become available.

"As a company that owns and operates the world's largest fleet of passenger vehicles, we have a vested interest and a history of working with manufacturers to integrate alternative-powered vehicles into our fleet," said Lee Broughton, director of sustainability for Enterprise Holdings, which owns and operates Enterprise Rent-A-Car as well as the Alamo Rent A Car and National Car Rental brands. "With airport and neighborhood locations within 15 miles of 90 percent of the U.S. population, our Enterprise Rent-A-Car offices are uniquely positioned to test the market viability of new alternative fuel technologies like the electric vehicle with daily commuters nationwide."

EVs do not use gasoline and do not produce greenhouse gas emissions. The cars can be charged using a standard 110-volt home outlet, or a 220-volt or 480-volt commercial charging station. Most EVs can travel about 100 miles on a single charge, accommodating the travel habits of the daily commuter, who drives an average of approximately 40 miles a day.

Enterprise Rent-A-Car initially will offer electric vehicles to customers across eight different markets where the infrastructure exists to support the vehicles, including Phoenix and Tucson, Ariz.; Knoxville and Nashville, Tenn.; San Diego; Los Angeles; Portland, Ore.; and Seattle. Beginning November 2010, charging stations will be installed at select locations, including several of the Enterprise "hybrid branches" - nearly 100 designated locations which offer hybrids and other environmentally-friendly rental options in 30 different markets. Enterprise is rolling the vehicles out to a limited number of branches to ensure that it can properly train its employees to show customers how to use and charge the EVs.

"As a company, we are committed to manage our business responsibly and for the long term," added Broughton. "Bringing electric vehicles to our fleet is one more way for us to leverage our leadership position to balance the needs of our customers, partners and the world around us."

The Allegheny County Airport Authority voted unanimously to increase the customer facility charge from $5.50 to $6.

With education on fleet planning, the customer experience, and new technology to understanding new mobility models and profitability for the next generation of car rental, the ICRS is designed to help operators become more efficient today while providing them a roadmap to a sustainable future.

For those independents that want to maintain their autonomy, while gaining the benefits of working with a well-established provider, affiliation is a good route to success.