Will manufacturers continue to jack up new vehicle prices to rental fleets? When will the used vehicle market stabilize? How will the jittery economy affect both markets?

If you knew the answers to these questions you should be in Vegas. Nonetheless, there are experts that study the new and used vehicle markets to prognosticate on the future of car rental for us.

ARN recently spoke with Tom Kontos for an updated analysis of conditions affecting the auto rental industry. Kontos is executive vice president of analytical services and customer strategies for Adesa as well as a frequent speaker at the Car Rental Show, among many other automotive industry events. For Adesa he produces Pulse, a periodic review of key micro- and macroeconomic indicators relevant to the vehicle remarketing industry and the auto industry in general.

Demand for Used Vehicles Strengthens
The growth in off-lease volumes is among the factors that have depressed used vehicle prices this year. However, a much more visible factor has been the dramatic decline in full-size SUV and pickup truck prices (a virtual “boycott” says Kontos) in May and June as gas prices reached the $4.00 level.

High gas prices, and the related consumer shift towards smaller vehicles, have also been responsible for the major increases in average prices of compact cars during this same period, Kontos says. With gasoline prices abating, this impact is lessening. 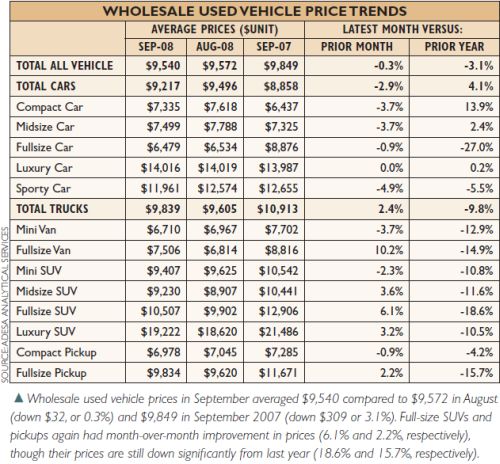 Adesa’s auction data shows that overall retail demand for used vehicles, which has been weakening since sales peaked in 2005, has begun to recover gradually during the second half of 2008. However, any continuation of the decreased availability of credit due to the most recent financial crisis could further limit demand for wholesale units. Greater difficulty and cost in obtaining floor plan financing may limit dealers’ ability to stock up on used vehicles purchased at wholesale, Kontos says.

Wholesale Truck and SUV Prices Stabilize
As retail demand picks up, wholesale auction prices, even for full-size SUVs and pickups, have stabilized. Kontos points out that wholesale year-over-year truck and SUV prices were down 7.4 percent in June, 4.8 percent in July and 2.2 percent in August, a trend toward a breakeven point year over year.

“I believe the market was overcorrecting for May and June and now it appears to be more accurately reflecting long-term demand for SUVs and pickups,” Kontos says. “That’s helping stabilize the wholesale market.”

“My expectation is that as we approach the end of the year we’ll see year-over-year prices flat with prior year, or even experience a modest increase,” Kontos says. “As we go into 2009 I expect that to continue.”

Yet New Vehicle Sales Continue to Slide
September’s new vehicle sales (including fleet sales) came in at 964,873 vehicles, according to sales tracker Autodata, the lowest level since February 1993. Showroom traffic is at its lowest point since 1986, according to CNW Research.

Kontos (and others) say the financial crisis is having a substantial negative impact on new vehicle sales, observing that the percentage of new car credit applications that are accepted is down. Kontos notes that many people are not in the market right now because they are upside down on their new car loans, which have been stretched to as long as six years.

Kontos is concerned that the amount of government spending needed for the financial bailout may result in more taxes and more deficits. More taxes means less spending power.

“Even if we solve the problem of liquidity, this could create a problem with consumer spending, which is 70 percent of gross domestic product,” says Kontos. “There’s a wait-and-see attitude with economy. The car runs fine, so there’s no reason to buy a new one.” 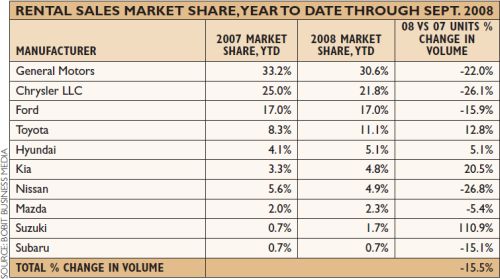 Will Manufacturers Ease Restraint in Sales to Rental Fleets?
However, with such moribund new car sales, the jury is still out on whether manufacturers will return to incentivizing sales to rental.

“At some point I think manufacturers will relax their restraint on selling cars to rental fleets, though I’ve been surprised at how disciplined manufacturers have been in terms of restricting sales to rental as the domestic market share dips further below 50 percent,” Kontos says.

Bobit Business Media’s sales figures show that sales volumes to rental have been down every month this year compared to the previous year’s sales. Kontos believes some of that reduction is coming from the rental companies themselves.

“They’re demanding fewer vehicles because they’re keeping them in service longer as a result of the switch from program to risk,” he says. “If the manufacturers were spiffing more rental units I imagine rental fleets would be stepping up to buy more.”

The Silver Lining: Limited Rental Fleet Sales Have Helped Wholesale Prices
Prevailing market conditions such as high gas prices and weak retail demand (brought on in part because of broader economic concerns) have hidden the positive aspects of prices that come from less supply, Kontos says.

The bright side to limited rental fleet sales has been the betterment of wholesale prices of off-rental (one-year-old) units. Older units are also experiencing a bump in pricing because dealers are not bringing excess trades to the auctions.

Those two extremes of the market have performed better than the core age groups of two- to six-year old units, which primarily represent off-lease vehicles and repossessions.

RACs Turn to Used Program Cars to Save on Depreciation
With bargains at auction, RACs are buying program cars and cycling them back into rental fleets. 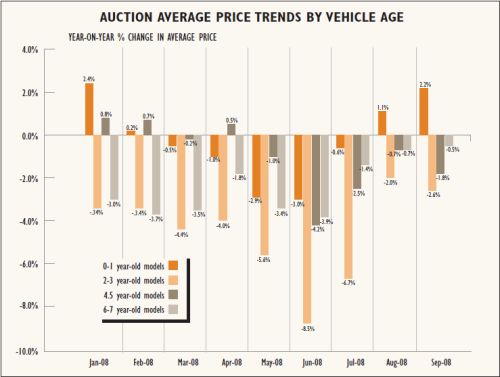 “I think more rental companies are looking at doing that as a way to cut costs,” Kontos says. “It might not just be a program car but a company car that’s got low mileage on it. Anecdotally at least, I’m aware that they’re doing more of these kinds of acquisitions.”

Though demand for SUVs at the rental counter may have waned, demand for minivans, with their utility and respectable fuel economy, remains solid. Kontos says prices for minivans have taken a hit this year, though not to the degree that big SUVs have. This may be a good time to buy a low-mileage van at auction for your rental fleet.

“As the major depreciation hit will have already been taken on one-year-old units, you get the benefit of buying them at auction for cheap,” Kontos says. “They do represent a good opportunity to buy low and not get hurt a year from now.” In terms of the usefulness of a minivan, Kontos speaks from personal rental experience. “On a recent business trip I had reserved an intermediate but got to the counter and they asked if I’d take a minivan,” he says.

Welcome to our world, Tom.

The Market Shift Is A Needed Correction Overall, Kontos sees the market shift to smaller vehicles as a needed correction.

“The new paradigm says our cars need to be more fuel efficient and we need to be doing better with the way we handle debt,” he says. “We were living in a period of excess, whether it was in the size of the vehicles we drove or the size of the debt we borrowed on and the lenders lent on. We’re adjusting to a period that’s a little more rational.”

When new methods of financing are secured, pent-up demand will be released.

“There’s a need to change and people want to change. If a lot of people knew they could get financing and wouldn’t get hurt trading in their big truck they would do it, because they want to buy a smaller car,” Kontos says. “As those impediments are removed, we’ll see some revitalization in car sales and car rental, and in vehicle value.”