Four operators are getting creative and thinking big when it comes to boosting their bottom lines. These profit-making ideas were showcased during the Tennant Group Roundtable Best Idea competition at the 2009 Car Rental Show. The winner, Monty Merrill, received a cash prize.

These concepts have been put into practice and are increasing business in car rental operations right now. Can they work for you?

Road Safe is an incremental product that Merrill’s company sells to cover towing and various non-mechanical breakdowns. “It is a great ‘piece-of-mind’ product that works well for customers who do not accept our loss damage waiver,” says Merrill.

The price is $4.99 per day. Merrill’s team does an assumptive sale on this product:

“At our location, we add Road Safe emergency highway help in the event you may need accident towing, lockout, flat tire, fuel or battery service 24 hours a day, seven days a week.”

Merrill says his average retention of the Road Safe product is 30 percent, or roughly $1.50 per day, which translates into $200,000 added profit annually.

Prior to selling this product, Merrill covered lockout, flat tire, fuel or battery service with either the manufacturer’s roadside assistance or his own personnel. “Our additional expense has been negligible,” says Merrill.

Accident towing is covered by insurance, either the company’s or the customer’s.

Taylor approached one of his local radio stations with the following proposal:

“If we preset all of our vehicle radios to your stations in positions one and two—and did not include your biggest rivals on the other preset buttons—how much free advertising would this be worth?”

The radio station offered the following: 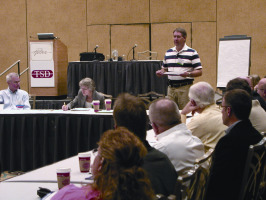 Vercollone instituted a special rate that he advertises on the radio as well as on street sign marquees, A-frame signs and windshield signs:

“As low as $19.99 a day.
Taxes, fees and mileage charges may apply.”
What the special entails:

“The special is designed to stimulate business, and it does that well,” says Vercollone. “It makes the phone ring, it increases walk-ins and it provides for upgrade opportunities, as less than 10 percent of the Corollas are out at the lowest $19.99 rate.”

Vercollone estimates the company gained 100 upgraded rentals at $29.99 per day that were most likely customers who needed the extra miles.

“What’s the one thing every customer must buy when renting a vehicle? “Fuel,” says Jones, who gives his customers a fill option based on miles.

Jones calculates that 70 percent of his customers drive less than 100 miles per rental.

Jones implemented the program in December 2008. In a three-month period he sold 451 FSO100 options, which generated additional revenue of $4,487.45.