With the exception of the post-Sept. 11 show, last year's Car Rental Show took place in what may turn out historically to be the industry's darkest hour. Funding was at a standstill. The global financial crisis was in full swing. The Chrysler bankruptcy was imminent, with GM soon to follow. A "staycation" was a kind term for kids jumping through the sprinkler in the backyard.

What a difference a year makes, as the industry has weathered its right sizing and is poised for recovery.

More than 500 professionals from the independent, licensee and corporate sides of the auto rental community convened in Las Vegas for the 2010 Car Rental Show with a renewed vigor, which was evident in the keynote speeches, educational sessions and on the expo floor.

The State of the Industry

The Car Rental Show, now in its 15th year, features keynotes and general sessions delivered the satellite view of the car rental industry from operational, financial and fleet perspectives.

Jeffrey Cerefice of Dollar Thrifty Automotive Group delivered this year's keynote address. Cerefice outlined the external forces that challenged the industry in the past two years, such as the economy's free fall, the financial market turmoil and credit crisis.

Cerefice said this "shock to the system" had the effect of a creating a "right-sized industry with pricing discipline ready to react to pent-up demand."

Though the changes are positive, it's imperative that operators stay ahead of the curve, said Cerefice. He cited the need for RACs to understand the migration to risk vehicles, the new role of lenders and the new OEM landscape. "They moved the cheese on us," said Cerefice. "It's a new game, and it's still evolving."

Cerefice highlighted the need for operators to exercise their remarketing muscles, which include investigating retail sales and online auctions. "Remember, you're in the used car business," he stressed.

Cerefice ended on an optimistic note. "The industry is healthier and more disciplined with fundamentals that bode well for our future," he said.

The Wall Street panel, assembled by John Healy of Northcoast Research, was comprised of players from different segments of the automotive industry, including fleet buying, remarketing and global distribution systems. The panel connected the dots on the car rental industry from a financial perspective.

Panelists outlined the many changes in the car rental business model compared to five years ago. Parallel to Cerefice's comments, the panel outlined the market forces that are enforcing a discipline on the industry, with positive effects on stock performance and the health of the public companies.

Healy pointed out that the market cap for public car rental companies collectively went from $555 million to $7.4 billion in less than two years. "There have been more gains in yield in the last 12 months than there have been in 12 years," Healy said.

"Our viewpoint is very positive on the industry," he concluded. "The industry is on track to correct its problems a year sooner than expected. It's an industry that is moving forward in the right way."

Mark Eckhaus and the team at Eckhaus Fleet rounded out the keynote presentations from the fleet perspective. Eckhaus preached asset lifecycle management, from fleet financing and planning to acquisitions and remarketing.

Acquisition costs continue to be a concern as manufacturers rein in rental fleet sales. "The car fairy didn't come last year and she won't come this year," warned Eckhaus. "You're not going to find many great deals, and there is a lot of new competition for used cars."

With the scarcity of available cars, Eckhaus stressed fleet planning well before acquisition and to get orders in early. "With good fleet planning you're going to make money," he said.[PAGEBREAK]

A Show of Hands on No Shows

The majority of the session was spent discussing no-show fees. "We are the only segment of the travel industry that does not have a fee for no shows or a system to guarantee a reservation," said Barton.

When Barton asked the audience members to stand if they paid for both their hotel room and airline ticket when they made their reservations, almost everyone stood up.

The panel stressed that the industry is not looking for a revenue grab, similar to airline baggage fees, but a way to better manage utilization.

"I don't care if I ever take a dollar from a customer for a no-show fee," said Craig Parmerlee of Ace, who maintains that the only acceptable utilization is 100 percent. "I just want my customer to show up for the rental so I can plan my fleet better."

Barton iterated that "clear, concise and articulate" communication and disclosure to the customer are essential.

"It would behoove the car rental industry to present the no-show initiative as a way to manage inventory and fleet to provide better service to its customers," said Valyn Perini, executive director of Open Travel Alliance. "That's how the hotel industry presented it to its guests, and it's an accepted and rational argument."

Perini saw the potential implementation of a no-show fee by Avis Budget in 2011, so now the fee is one of two rules being written by Open Travel Alliance this year and to be published in December 2010.

Avondale Partners' Bob McAdoo, a car rental analyst with roots in the airline industry, said, "It wasn't the large airlines that started the move to guaranteed reservations; it was the small ones."

To that end, the audience of independents and franchisees weighed in. Estella Lo, a Budget franchisee in Vancouver, recounted that she tried to implement a no-show fee during the Olympics but saw her reservations drop sharply.

An operator from Alaska brought up the issue of no-show fees and credit card charge backs. A customer disputed the no-show fee and won because Visa has no policy on it for car rental, whereas credit cards do have a policy for hotel and airline reservations.

Another operator said she reduces no shows with a simple e-mail confirmation. "If you don't ask for an e-mail address and send them a follow up, to them it doesn't feel like a real reservation," she said.

The no-show problem is not just limited to North America. "American car rental, this is your mission and we trust you can figure it out," said Paulo Gaba Jr. of Sixt, who is also on the board of directors of the Brazilian car rental association.

If the car rental industry "can't figure this out" and allow the media to dictate how this is communicated to the public, "it could wind up in legislation," cautioned Busking.

To close the session, Barton asked for a show of hands of those who would like to see some form of a no-show fee structure implemented. Again, almost everyone in the room raised their hands. 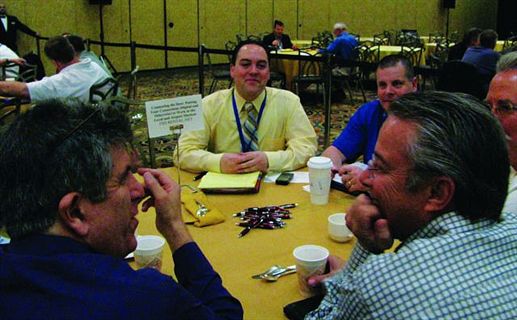 In a business dominated by a few large companies, Watts described how Colonna built his independent car rental company from one location with seven cars into 28 locations with more than 4,000 cars.

On the legislative front, Colonna has lobbied against predatory car rental taxation in local markets, worked to repeal vicarious liability at the federal level and helped to ensure that rental fleet lending was included in the federal government's Troubled Asset Relief Program. Colonna has been active in local associations and ACRA for many years.

Asked at the Car Rental Show: How did you change your business to survive the recession?

"We shop utilities, insurance and other services on a yearly basis. We're running higher mileage cars and we buy them with our own money. We had our best year ever in 2009, our 43rd year in business."

"We cut fleet and streamlined labor. The Winter Olympics was a good opportunity to increase our incremental sales and we added more SUVs to our fleet."

"We reined in spending and better managed operating expenses. We cut our fleet and raised our rates. We marketed aggressively. We ran close to 95 percent utilization, which is like living moment to moment, car to car. We struggled, but we came out stronger."

"We took restrictions away such as cash rentals and the 18-year-old requirement. We cut bottled water and coffee and we cut down on trash hauling frequency. We felt we had to get into the 80-percent range locally for utilization and we cut fleet to get there. We look at every check from the previous month and ask ourselves if we really needed that."

"We started paying attention to what the customer was asking for and we spoiled them. We deliver almost every car now, most within seven miles. All of our business is prepaid and we're almost completely sold out. With prepaid reservations, we are now able to give customers their exact car model."