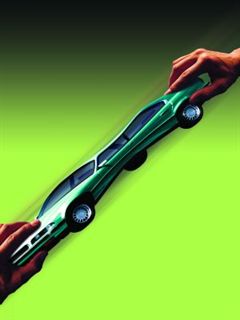 Compared to two years ago, car rental companies have increased the number of months they keep rental units in fleet. What's behind the increase? Through Manheim auction data, a survey conducted by Auto Rental News and operators' insights, we make sense of the new normal.

The higher mileage trend was driven less by the choice of car rental companies and more by external factors. It started with skyrocketing fuel prices in the summer of 2008, which wrought havoc on the used-car market and caused wild swings in residual values. Though the trend had already been set in motion, OEMs lost their appetites for repurchase programs. The subsequent collapse of the bond market produced liquidity issues and forced RACs to scramble to fund fleet purchases.

Then came the Great Recession and manufacturer bankruptcies. OEMs shut down the factory pipeline, which severely limited supply to match stagnant new-car demand. With less need to keep factories open and fewer units to dump into rental, OEMs had no reason to play "Let's Make a Deal" with rental companies.

Credit has thawed, but the days of cheap money are over. Travel demand is returning, inch by inch. The market is releasing pent-up demand for new cars, while reacting to the Toyota recall. Revenues remain depressed, but so are costs. Tight fleets are keeping rates high. As a result, revenue per unit is at its highest in more than 10 years. Can we expect this trend to continue? And do car rental operators really need to drive up hold times to survive in this market?

"We've increased our hold times, often until near the warranty limits," says Chris Barber, a Nextcar licensee in Maryland. "It's simply cheaper to keep them longer. It's working out well, but we are spending a big part of our savings on increased maintenance costs."

Monty Merrill, a San Antonio-based Dollar and Thrifty franchisee, has stretched his fleet from an eight-month hold time to about 18 months. "It started with credit," he says. "Then the manufacturers quit making the cars and the deals were just not very good."

However, Merrill is getting the same money for his used cars this year than he did last year for cars with fewer miles. "It doesn't make any sense to get in a hurry to sell them right now."

David Funston of Funston Fleet Services says the "for sale" lists he receives from the major rental companies now have cars in the 40,000-mile range, though that's fewer miles than last summer when wholesale supply was severely limited.

Mike Maloney, a Budget franchisee in San Antonio and El Paso, has gone from an 18,500-mile ceiling to 22,000-23,000 miles for his fleet of Toyotas, which he runs almost exclusively. He credits the modest increase to Toyota's high resale values, though the recall has caused recent disruptions.

For some operators, selling short is working well.

"Right now we're selling on a shorter cycle than the norm and realizing high returns because of the lack of low-mileage used cars at auction," says David Pilcher, executive vice president of Arelco, a major National franchisee. However, "we're fortunate in that we have not faced the financial pressures from our lender that other companies have," he says.

Pilcher says his depreciation has not suffered with this shorter cycle, and the company enjoys the competitive advantage of a newer fleet.

"Operators who are flipping their low-mileage cars right now have an advantage," says Dave Arney, vice president of VRCG Inc., a consulting firm in Southfield, Mich. "[Dealers are] competing for a shrinking amount of vehicles and it has driven the prices up astronomically. Those cars are bringing way over what anybody would have predicted, say, 11 months ago."

Arney says, however, that the short cycle works for operators who have the remarketing expertise to back it up. "The operators able to spin their cars quickly now are typically the ones who have been in the game in the first place," he says.

Some major fleets are actively trying to convert a percentage of program cars to risk. "The market is outperforming the residuals the manufacturer put on the cars six months ago," says Mike Kane of VRCG.

While the used-car market holds up, new-car deals aren't what they used to be. "Rental companies aren't getting the same fleet incentives - not even close," says Arney, noting that OEMs no longer have overcapacity issues. "[Operators] are finding they have to hustle to get the new cars in through the front door."

Pilcher concurs. "Manufacturers have taken the position that they're trying to reduce the number of cars they're putting into rental, so the deals aren't as attractive as they were," he says.

Smart operators today, Arney says, are playing the "opportunity game." No longer tied at the hip to a single manufacturer, operators are looking for pockets of new-car deals and are selling their existing fleet into a strong used-car market.

"I am holding most of my cars longer, but I am pulling five to 10 cars per month and 'cashing in' on the current used-car market," says Sharon Faulkner, a Thrifty licensee in Albany, N.Y. "My depreciation is holding."

Responding to ARN's survey, one operator reports SUV models such as GMC Acadia are selling well with less than 15,000 miles and only four months in service. This is tempered with other models past the 30,000-mile range that are at "resale value low points." The operator is "trying to still find the best price-sell point."

Warranty limits matter more than ever. "Dealers are telling me it's a lot harder to retail a high-mileage, off-rental unit, especially if it is past the 36,000-mile warranty," says Tom Kontos of ADESA, a provider of vehicle remarketing services.

The scarcity of low-mileage units at auction is affecting operators who fleet with used cars. "[There are] very limited good used cars available at auction," writes one operator in the survey.

"It is getting harder to get the lower mileage rental units at the auction, but far from impossible," says Faulkner, who runs used units exclusively due to a lack of new car deals.

The liquidity issue has passed, and operators with solid track records say they don't have a problem obtaining fleet. Yet even if the price is right, the mood is not to over-fleet like the old days. "I won't go heavy just because someone throws a deal at me. You pay for it one way or another," says Maloney.

Another preventative factor is that banks aren't cutting any great deals. These operators can still borrow at close to the same percentage over prime, or LIBOR, but lenders have now established minimums on rates.

And banks are enforcing more conservative depreciation for some manufacturers. One operator's bank will only let him borrow from another bank if the primary bank refuses the deal.

"We got spoiled," says Merrill, referring to the pre-credit crisis era.

In this new economy, "we sold ourselves down to a conservative fleet," Merrill says. He no longer feels the need to fleet up to meet demand peaks, "unless [a manufacturer] comes in with a fantastic deal, and I don't see any steals out there right now."

Though the domestics have backed away from repurchase, newer Asian players have stepped in. The new programs have about the same length but are generally more expensive, and have tighter mileage restrictions and limited supply.

Nonetheless, "they're still flexible and a good way to fleet up seasonally," says Mullen, who is mixing in a greater number of repurchase sedans than two years ago. Repurchase programs allow ACE to depreciate its risk units further and run them out a few more months.

Other operators have chosen leasing.

"Leasing provides me with an easy source of fleet," says Steven Romanowski, a Dollar franchisee in northern New Jersey. "I don't need traditional sources of funding. Plus I don't have to worry about selling at the tail end and can concentrate on my core business - renting cars."

Leasing also works for Neil Rivel, a Dollar Rent a Car franchisee serving central New Jersey. However, keeping mileage under lease limits can get tricky. Romanowski's lease agreements are for one year with 30,000 miles.

Rivel says the majority of his rates are still with unlimited mileage, but he has mileage rates as well. When Rivel's managers call customers to confirm the reservation, they ask the customer's travel plans and choose a vehicle with a certain mileage appropriately.

"It has made the managers look at their fleet a lot differently," he says. "They are now trying to utilize the vehicles in a most mileage-efficient way."

The Japanese automaker's recall has affected the hold times of companies that run significant percentages of Toyotas. Initially, operators had to scramble to cover for the grounded fleet. Bob Barbush, an Avis franchisee who runs 50 percent Toyota, bought used vehicles for the first time.

Now that the recalled vehicles have been handled mechanically, many operators are holding and waiting out the storm on the remarketing end.

"I haven't been able to give away a Corolla or Camry in weeks," says one operator, who adds that values on those models have dropped a couple thousand dollars.

Consumer skittishness regarding used recalled vehicles may be less of an issue now with Toyota's generous new car incentives, which are luring used buyers onto the new car lot.

Nonetheless, most operators are not rethinking their relationships with Toyota.

"Toyota has done very well for us for many years. Unless I see indications that their value will drop for a significant period of time, I have no reason to change. This is a bump in the road," Maloney says.

With the migration to risk and manufacturers selling fewer cars into rental, the focus has shifted to remarketing. Remarketing departments at the majors are growing as the market continues to shift to risk, Arney says.

Merrill used to sell everything at auction, until one major rental company muscled its way into the lanes with "a gazillion" risk units. The sale did not go well for Merrill. "I walked out of there that day thinking, 'I've let my remarketing be in someone else's hands,'" he says.

Merrill pulled up a list of all his buyers, including the ones from the auction, and started faxing out available cars every week. He instituted a "no questions asked" return policy, even if the buyer simply bought one too many cars. "We've built up a core group of buyers, and today, they're calling us," Merrill says.

For the units that don't sell with that method, Merrill runs them through GMAC's online SmartAuction. "I haven't been to the auction in over two years," he says.

Mullen of ACE is buying a higher trim level and adding options such as sunroofs and wheels to make the cars more attractive on the back end. Maloney is doing the same. "I'm always going to be able to buy a car, but I can't always sell them," says Maloney.

"The plain Jane, run-of-the-mill rental car is not the most exciting thing for dealers these days," Mullen contends.

Arney says operators should have been exercising this market intelligence all along. "I don't see guys putting the time into remarketing and they should, given what fleet costs mean to their bottom line," he says.

Certainly, this is no reason for complacency. Moving forward, understanding and exploiting all channels of the used-car market are essential. "My advice is to diversify. Use auctions, online auctions and brokers and go direct to dealers. Have a diverse remarketing mix that allows you to turn your money quickly," says Arney. "Rental car operators who will keep marching to the same old tune without doing something different will get run over, if they haven't already." 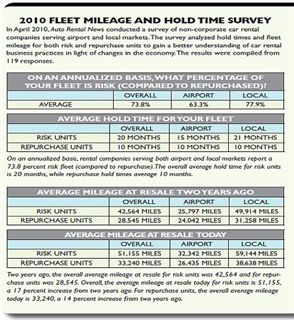 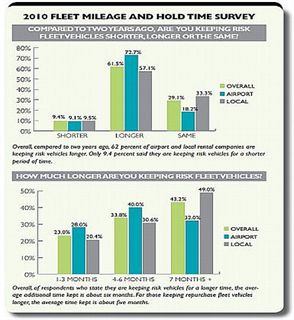 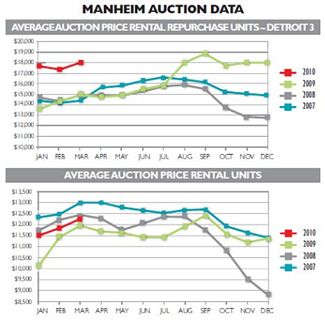 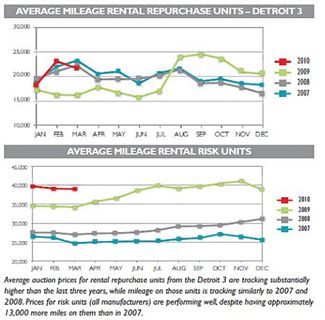