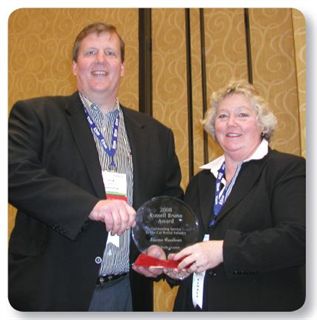 The Board of Directors of the American Car Rental Association (ACRA) has appointed Sharon Faulkner to the position of executive director. She assumed her duties on Oct. 15, 2010.

However, she says she would have found it almost impossible to stop being involved with the industry she has served for more than 30 years in various roles. "The decision to stop running the day-to-day operations of a busy airport location didn't necessarily mean shutting the door on car rental," says Faulkner.

A Wealth of Experience

Faulkner got her first industry job as a customer service rep with Airways Rent A Car, once a top-five worldwide RAC, and then with Dollar A Day Car Rental. She moved on to become part owner of independent RAC Ajax Rent A Car for 17 years and then a Dollar Thrifty franchise owner for 11 years until her recent sale. She has also served as a corporate area manager for Budget Car Rental.

During these years Faulkner played an ever-increasing role in shaping auto rental- and leasing-related legislation in New York state. Serving as president of the New York Vehicle Rental Association for 10 years, she fought to resolve New York's CDW issue. She then turned her attention to vicarious liability reform, not only in New York but on a federal level. Vicarious liability was abolished under the Graves Amendment to the highway safety bill in 2005.

"Testifying in Congress gave me a firsthand look at how hard it is to enact change," says Faulkner. "It convinced me that we needed a strong national association to be successful."

Faulkner has also served on the ACRA board and its predecessors continuously since 1996. She received the Russell Bruno Award at the 2008 Car Rental Show for outstanding service to the car rental industry.

Without the burden of running a car rental operation, Faulkner says she is looking forward to being able to concentrate her efforts on lobbying for the industry, with a commitment to keep ACRA in the forefront.

"Once again we are facing an attempt in Congress to reverse the Graves Amendment that eliminated vicarious liability," says Faulkner. "We need to refocus our efforts to assure that this egregious law never burdens our industry going forward.

"I know, from experience, that this is not the only issue we will face. Excessive and predatory rental excise taxes, no-show fees, standardization of car classifications and a host of other concerns will be addressed by ACRA. I will be there, full-time, making sure our industry has a consolidated voice," she says.

Commenting on the appointment, Bob Barton, president of the association, says, "We are excited that Sharon has agreed to take on the role as executive director of ACRA. For years, Sharon has been an integral part of the legislative stand this industry has taken. She not only brings an enormous amount of experience to the association; she brings the respect she has garnered from legislators, industry executives and governmental agencies. Her unbounded loyalty to and support of our industry will help ACRA further develop its mission of championing the legislative matters affecting our industry."

"We would also like to publicly thank Sean Busking for his efforts over the past few years in leading the charge for ACRA," Barton continues. "Under Sean's leadership, the association has grown not only in membership, but in stature within the industry with car rental companies, suppliers and governmental agencies.

"We are pleased that Sean has assumed a new role in charge of the day-to-day operations at Fox Rent A Car," Barton says, "and look forward to his continued contributions to the car rental industry and the efforts of ACRA."