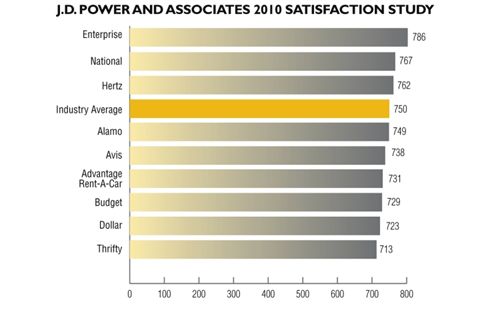 Overall customer satisfaction with rental cars has returned to pre-recession levels after declining to lower levels during the past two years, according to the J.D. Power and Associates 2010 North America Rental Car Satisfaction Study released in November.

Overall satisfaction averaged 750 on a 1,000-point scale in 2010. This is an improvement from 733 in 2009 and 734 in 2008, equal to the 2007 overall score, yet below the 767 score in pre-recession 2006. Satisfaction with the reservation process, pick-up process, shuttle bus/van and costs and fees achieved three-year highs. Each of the rental car companies included in the study has improved in 2010 compared with 2009.

Enterprise ranked highest in customer satisfaction for a seventh consecutive year and performed particularly well in all six factors. Enterprise is followed in the rankings by National and Hertz, respectively.

In addition to increased satisfaction with rental car companies in 2010, customer loyalty and advocacy have also improved from 2009. In 2010, one-third of business travelers and 28 percent of leisure travelers indicated they "definitely will" rent from the same brand again-marking increases of 2 percent and 5 percent, respectively, from 2009. Advocacy rates have increased by 3 percent among business travelers and 6 percent among leisure travelers from 2009. In 2010, 30 percent of travelers in both groups say they "definitely will" recommend their rental car company.

Stuart Greif, vice president of the travel practice at J.D. Power and Associates and the director of the study, spoke with Auto Rental News to explain the survey and put some qualitative analysis behind the numbers.

The roller coaster economy has had a huge influence on overall scores in the past few years.

"The macroeconomic conditions affecting both business and leisure travel as well as consumer discretionary spend have a demonstrable impact [on scores]," says Greif. "They pose the greatest challenge when revenue is down when [car rental companies] are looking at how to reduce operating costs and manage profit through a downturn.

"By quickly improving their operations as the market started coming back, rental car companies started reversing the negative impact on satisfaction that cuts and deferred investments had during the downturn," says Greif. "Satisfaction snapping back in 2010 is a testament to the industry doing its best to balance the tension between customer satisfaction and hard economic realities during this period."

Economic conditions affected satisfaction scores in other travel industries, says Greif, though scores in airline surveys were bumped up somewhat during the economic downturn. That's because lower airfares and smaller passenger loads resulted in less congestion at airports and on planes, as well as fewer checked bag problems and fewer complaints with baggage fees. Nonetheless, airline scores were still much lower than in 2006, before the onset of baggage fees.[PAGEBREAK] 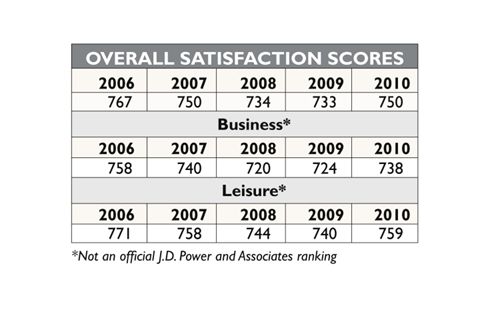 "It's important to note that 22 percent of problems experienced by customers go unreported, which means there was never an opportunity to resolve them," says Greif. "The bottom line is that prevention of problems is a far better strategy than service recovery for achieving high satisfaction levels."

Generally speaking, the rental car itself constitutes about 20 percent of the overall score while the return process is roughly about 20 percent. Cost and fees make up about 25 percent, while reservations, shuttle bus and van are not weighted as heavily. Speed makes a big difference, mostly in the pickup and return processes, Greif says.

Greif's team derives from each survey which part of the rental experience is most important to the individual respondent and in what proportion. The survey breaks down each of the seven categories into further components. The rental car category has 10 subcategories, for example. One of those is "smell." If one respondent graded smell with a score of two, (i.e., the car stunk) while other subcategories fared well, and the respondent scored the car overall as only a three,  that very low score for smell is weighted more heavily in the overall average. The reasoning is that the bad smell was obviously very important to that renter's experience.

Why are some brands included in some years and not in others? J.D. Power needs at least 100 surveys for the data to be statistically relevant and thus rank a company in the survey.

J.D. Power tries to increase the overall sample size of the study as a means to try to include as many brands as possible, time and money permitting, Greif says.

The industry started buying fleet again in the first quarter of 2010, mitigating the trend of high-mileage cars during the recession. Newer fleets factored into higher scores in the rental car category for this year, and Greif expects that positive correlation to continue into next year's survey.

Rental car rates have increased for leisure travel but have held steady for corporate contracts. While high rates are good for the industry, they have an adverse impact on customer satisfaction scores, generally speaking. Higher rates may cause lower scores moving forward. However, "We think that the trend will be more than offset by improvements in the operations regarding sacrifices made during the downturn," Greif says.[PAGEBREAK]

The survey does not officially rank business versus leisure, but J.D. Power does identify respondents on business or leisure trips. In general, business travelers are tougher graders but they tend to be more loyal, Greif says.

Overall, business renters graded the industry at 738 as a whole, while leisure travelers gave a grade of 759. This higher leisure grade is true even among the brands that focus on the business traveler: Avis scored a 722 with business travelers and a 755 with leisure travelers. Hertz scored 744 for business and 776 for leisure. National scored 771 for leisure, 764 for business. (Enterprise, for that matter, scored 775 with its business customers and a whopping 792 with leisure.)

The biggest brand surprise in the 2010 survey was Advantage, which beat out Budget, Dollar and Thrifty in satisfaction. Advantage scored 731 in 2010 compared to 674 in 2008. It is reasonable to surmise that Hertz's ownership was the main factor in its improvement, according to Greif.

Avis, which wins more than its fair share of global travel awards, scored below the industry average again, as it had in 2009 and 2008. While Avis scored solidly in most categories, it ranked a two out of five in the costs and fees category, which lowered its overall score.

Even if two rental cars had identical pricing, Greif explains, if one is delivering a better experience for the money, it will tend to have better scores in cost and fees as well.

Both Dollar and Thrifty have scored consistently low in this survey as well as in the past few surveys. Part of this may be due to business model and customer segment differences-focusing more on the lower-cost end of the market. At the same time, Greif points out that in the airline industry, on which J.D. Power also conducts similar research, the low-cost carriers such as JetBlue and Southwest rank highest. Greif suggests that there is much that Dollar and Thrifty can learn and apply from how these airlines approach service and how they innovate to make the traveler's experience more efficient and enjoyable to improve their performance.

Enterprise's feat of seven consecutive wins is remarkable. "Enterprise has really understood what matters to travelers," says Greif. "The ability to have consistent performance as Enterprise does and to have three of the parent company's top four brands at the top shows something about the overarching management of the company and how they focus on the customer experience."

As this is an airport-focused study, Enterprise's "we'll pick you up" benefit is irrelevant to this data set, though Greif says the RAC probably gains some positive bleed in the customer's mind from getting picked up in local rental experiences.