According to the Federal Bureau of Investigation, in 2007 an estimated 1.1 million motor vehicles were stolen. How many of these were rental cars? The data is hard to come by. Nevertheless, the cost incurred by rental companies is steep.

Once a rental car is stolen, chances for a police recovery diminish each day. Many are shipped overseas. And if the rental agency is unaware until the end of the rental period that a theft occurred, the chances of repossessing the car decrease significantly.

As the sophistication of design technology has increased—making all physical documents forgeable—the number of fake documents has skyrocketed. As a result, identity fraud, which includes the loss of personal financial account information and ultimately theft, is one of the fastest growing crimes in America and has topped the Federal Trade Commission’s list of consumer complaints for years.

Three fraud prevention systems—two in the U.S. and one in Canada—are now available to help prevent ID fraud before the renter leaves the lot with your $20,000 asset. 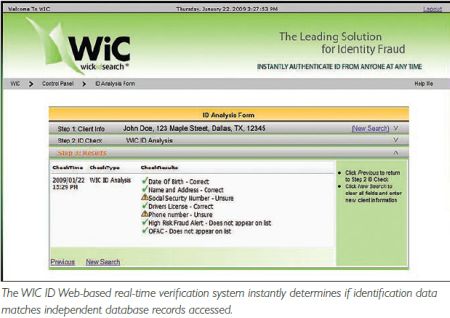 A car rental agent asks the customer to display his or her driver’s license. At least two pieces of data are then entered into the secure Web-based system. Within seconds, the verification process will determine whether or not data entered matches database records accessed. If information such as name and birth date does not match, various other questions can be asked.

The authentication process is designed to be inexpensive and immediate, minimizing any inconvenience experienced by customers as they wait for results, according to Paul Simpson, president of WIC USA Inc. The system does not retrieve or store data, so it poses no vulnerability to hackers. Nor does it compromise individual privacy, Simpson says.

Available now, the system costs per transaction about $1–$3 with no upfront, monthly or annual fees.

The system is brand new to the car rental industry but is in beta-testing with several major financial institutions, says Gary Reynolds, chief security officer for the company.

To use the system, car rental counter operators scan the driver’s license using a proprietary Dragnet scanner at the time of rental. The scanner translates the facial image into a thumbnail, which is then checked against Dragnet’s database. Within seconds, the car rental company is notified if the document is legitimate or counterfeit. Dragnet Intercept authenticates more than 1,600 different forms of identification documents, both domestic and international, according to Reynolds.

Whereas other systems check to see if the identification document number has been used before with a different name, “We actually disassemble the document electronically,” Reynolds says. The system examines the bar code, the mag stripe, the front of the document and the hidden security features, and combines the information into an easily interpretable signal at the desk. Once scanned, the verified information can automatically populate a rental agreement.

The system goes further than simply authenticating the document at hand—it checks to see whether the facial image has been associated with a different name or has been used in another fraud event. Also, operators are notified if the customer has been placed on a watch list by other rental agencies or institutions.

Companies have the option to use just the driver’s license authentication feature without the facial recognition component, though Reynolds warns that those companies lose a powerful prevention component of the system.

Dragnet Intercept is available now for car rental operations. After some initial IT integration between the system and the car rental operation’s network, the system is virtually “plug and play,” Reynolds says. The scanner can be leased for $149 a month. The cost of a DL scan and facial database cross-check runs $1–$3.

In addition to the risks of vehicle theft, drivers with invalid licenses are five times more likely to be involved in a fatal crash, VerX Direct President George Sutej points out. Statistics show that more than 10 percent of Canadian drivers on the road have invalid licenses and 75 percent of suspended drivers continue to drive.

“As trends in liability legislation shift the responsibility for due diligence onto companies and their owners, we envision VerX Direct delivering both short-term ROI and ongoing, long-term value to our customers,” says Sutej.

Rental agents using the VerX system type in the renter’s driver’s license number and date of birth to verify government-issued licenses. As with the WIC ID product, renter data is not stored in the system. The program is linked directly to the Canadian Ministry of Transportation (the Canadian equivalent to the U.S. DMV). A database check will determine whether or not a renter is using a false license, has a suspended license or if the driver requires an ignition interlock, a device used in accordance with DUI convictions. 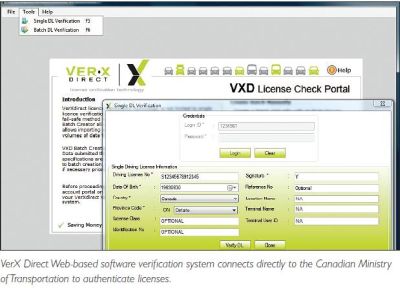 To verify license numbers, operators have the option of using the VerX Direct Web page or the company’s computer software program. The software can be integrated with car rental management systems with minimal IT effort using its API (application programming interface). An extra monthly fee is required to use the software version.

The company plans to include a swiping device to read information off of government-issued documents in the future.

There is a one-time set-up fee of less than $300 for the VerX product, available only in Canada at present. Each verifying transaction costs $2–$3 per inquiry. Car rental companies may choose to employ a cost-share or revenue model that uses a driver’s license verification fee to cover some or all of the cost of verification.

Operators say that one warning sign of a potentially fraudulent transaction is being presented with an unfamiliar out-of-state license. “It’s just a feeling I get,” says Monica May of Accessible Vans of America in Florissant, Mo. “You know what your home state ID looks like, so it’s always a question to be sure that the out-of-state license you’re looking at is actually valid.”

Owings Mills, Md.–based Allstate Auto Rentals’ Thomas Thayer agrees. “Because we’re locally based, I tell my people if you get something that’s out of state, that should raise a red flag,” he says. 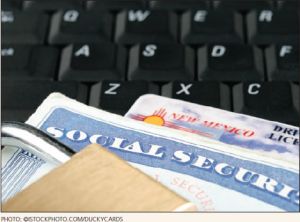 Thayer recently experienced a renter who used an invalid driver’s license and drove off with the vehicle. After receiving a call from an unknown third party whose credit card was charged for the transaction, Thayer and his team located the vehicle using a GPS tracking system. They discovered that the fraudulent renter had equipment in the vehicle to create fake IDs.

James Schwehr, owner of Affinity Luxury Car Rental in Toronto, lost a Toyota Camry to a renter with an out-of-province fraudulent license. “The insurance company did not cover [the loss] because the client had consent when he drove off the lot,” he says.

Even renters with invalid licenses who are not trying to steal a car pose a risk. “Most of these renters were not aware that their license was suspended, but that doesn’t help us,” says Schwehr. If those renters get into an accident, the RAC’s insurance company may not cover the claim.