When tragedy hits, people instinctively look to see that their loved ones are safe. Recently, when hurricanes Gustav and Ike were forecasted to hit landfall in southern Louisiana, more than 50 parents of Tulane University students phoned into a local Enterprise Rent-A-Car location in an attempt to get their kids out of harm’s way.

The parents were concerned that their minor children would be unable to rent a car. Thankfully, Enterprise does indeed rent to Tulane students who are under 21 years old.

“The many parents I spoke to were relieved and made a reservation for their kid to rent a car and get out of the area,” said Rich Hemphill, area manager, downtown New Orleans. “The students were all grateful and patient and we truly were their saving grace.”

In another instance, on the rainy and windy morning before the Gustav hit southern Louisiana, Enterprise customer Kendra Silve was having mechanical problems with her rental minivan—it wouldn’t go over 10 mph. Enterprise management trainee Delvin Robinson drove 30 minutes to meet Silve at her house with a replacement vehicle.

Enterprise then arranged for a tow truck to take the malfunctioning rental car and Robinson back to high ground safely.

Stepping Up Communication
From the minute a potentially-catastrophic storm is forecasted through to the aftermath, RACs say communication is the absolute key. Quality communication with customers, employees and corporate offices can make a huge difference when disaster strikes.

To keep everyone abreast of what’s going on, Dollar Thrifty sends out satellite phones to pivot points around the affected area. The company immediately organizes a conference call with the human resources department, customer service department and all operations employees that could possibly be in the storm’s path.

“We get that group together and talk about rate management—we obviously don’t want to be gouging customers in need,” said Mike Souza, staff vice president, corporate operations for Dollar Thrifty. “In the affected area we’ll tell everyone to remove one-way fees and other costs associated with returning cars either late or early.”

Dollar Thrifty removes the one-way fee because often in situations like these, rental customers have fewer choices of what to do. For instance, if a family is on vacation and there’s a major storm, they may have to drive to another airport to fly home. That family would normally be hit with a one-way fee.

In the wake of hurricane Ike, people all over Texas were waiting in line for gasoline for hours and paying sky-high prices. To compensate, Dollar Thrifty dropped its standard $6.99 per-gallon refueling charge down to the average pump price of about $4 per gallon. Also, immediately following the storms, many RACs froze rates in the affected areas.

To further enhance communication, Dollar Thrifty also has its corporate communications department send out email blasts to affected employees. The car rental company has an “Are you OK?” emergency phone line set up to keep employees updated with information such as airport reopenings.

When a storm appears to be headed toward a rental location, Enterprise jumps into action. A week before hurricane Gustav hit landfall, New Orleans-area location managers commenced daily conference calls with St. Louis headquarters. As the storm approached, an additional daily conference call began to establish how each branch would close down in the event of a mandatory evacuation. 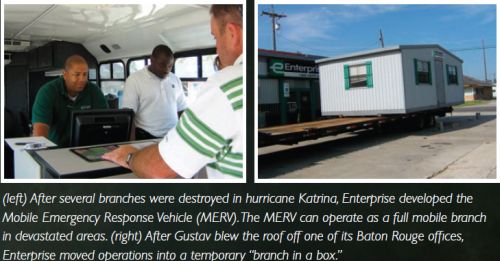 “We learned a lot from Katrina here,” says Kurt Klebe, vice president of New Orleans Enterprise. “This time we made sure we had a good phone tree in place that accounted for every employee. We wanted to ensure the safety and well-being of our employees.”

When areas of southern Louisiana were placed under mandatory evacuation, Enterprise closed those stores and had the phones forwarded to the nearest location out of the storm’s path. This way, customers can still get information as to where to return or rent cars.

Making the Best of a Bad Situation
Can a disaster actually be good business for car rental agencies?

Right before the storm hits, there is a rush of customers who either want to return vehicles or rent vehicles to get their families out of town. Then, the days following the storm, first responders—such as FEMA, Red Cross and the media—come into the affected area and need to rent vehicles.

Natasha Steffan, owner of Auto Rental Etc. in Lafayette, La., incurred some minor tree damage from Gustav, but didn’t lose any of her 25 vehicles. “We form a big square with all of our cars because, unlike tornadoes, hurricanes hit something and then jump over it.” Prior to the storm, many local residents rented her cars to get out of the area.

“Now after the storm, business is busy with a lot of rental replacement,” says Steffan. “All of my trucks and vans are out on rent with the utility companies who are in doing work.”

After suffering major building damage after Katrina—and subsequently Rita—Steffan says the first thing she does when severe weather is forecasted is back up all of her electronic files. “If you protect your files and keep track of your employees, the rest will work out,” she says.

According to Klebe, Enterprise branches in the affected area also saw a boost of business after the storm.

“On our conference calls we talked about how important what we do is to the immediate recovery effort,” Klebe says. “We’re not Red Cross or FEMA, but we do play an integral role in making sure those folks have transportation.”

For customers needing information during and after the storm, Enterprise set up a 1-800 message line as well as a local call center that is answered by an Enterprise employee in southern Louisiana. That person is more familiar with the situation than someone at headquarters in St. Louis.

“We have 97 branch locations in southern Louisiana; each location was responsible for contacting their customers” Klebe says. “We were telling people ‘we’re going to stay open as long as possible, but this is what you should do with your vehicle if there’s a mandatory evacuation.’”

During the actual disaster, there will naturally be a couple days when rental companies won’t do any transactions at all. And it is common that after the storm, a branch’s fleet shrinks as renters have driven out of town. But, Souza of Dollar Thrifty says they were able to rent the cars they had left to the disaster-relief personnel and thus saw a spike in business.

“In situations like these, you really try to be a good citizen,” Souza says.

Advantage Leverages Home Office Position
As a result of the devastation caused by hurricane Ike, Texas-based Advantage Rent A Car sent an inventory of rental cars into the Houston area.

Thousands of vehicles in the region had been either rendered inoperable or destroyed as a result of flooding and other storm damage. Advantage wanted to assist in taking care of the demand for rental cars that were needed in the city for relief and reconstruction.

“As a company with deep roots in Texas, we were naturally concerned for the welfare of our employees, friends and neighbors,” says Denny Hecker, chairman of Advantage.

Advantage officials said most of its Texas car rental locations were nearly rented out after Ike because of the immediate demand for insurance agents, claims adjusters and government workers. However, having a large portion of its fleet in Texas, Advantage is in a unique position to leverage its inventory of cars and make them available in the distressed region. 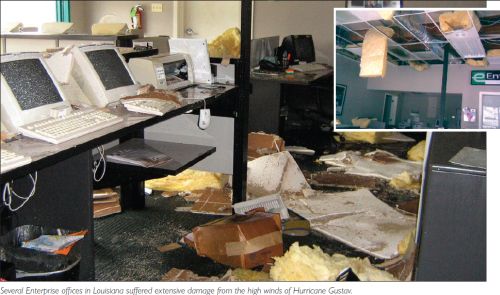 Advantage was offering a “Take Your Pick” program that allows customers to pick the rental car they need, ranging from economy cars through full size and minivans for only $15 per day on weekends and $25 per day on weekdays.

Another program offered to the greater Houston area was a value on one-way rentals originating from George Bush International Airport to any Advantage location. Car rentals for economy cars through full size and minivans are $30 daily/$150 weekly for all Texas destinations, and $60 daily/$240 weekly for all designated cities outside of Texas.

MERV to the Rescue
After a number of branches were destroyed beyond repair in hurricane Katrina, Enterprise developed the Mobile Emergency Response Vehicle, affectionately referred to as the MERV.

The MERV is a full mobile branch complete with generator power to run everything from computers to air-conditioning. Klebe ordered the MERV to be sent down to southern Louisiana a week before the storm was expected to make landfall.

The Plaquemine, La., branch was completely destroyed by Gustav, yet the MERV was able to open up in its place and function as a normal branch in the devastated area. When adversity hits, it’s important to be flexible with your disaster plan—no one ever really knows what twists will take place.

“The bottom line is that both our preparation and recovery would not have happened without the support and dedication of the employees in Baton Rouge,” says Jason Felsman, Enterprise group rental manager in Baton Rouge who was on duty on the MERV. “It was amazing to see the commitment of our staff even while most were dealing with difficult challenges on a personal level.”

Kara Ohngren is a contributing writer for Auto Rental News.